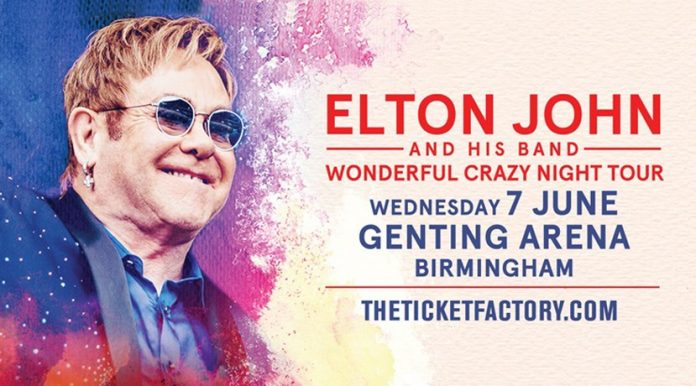 Elton’s still standing. But is he better than he’s ever been?

It is a sad reflection, perhaps, on recent events that police are needed at arena gigs. But it is also a wonderful indictment of the power of music that when Elton John plays “Crocodile Rock” tonight towards the end of the set that one of the West Midlands Constabulary is cheerfully singing along.

Sir Elton John is one of those rare artists that everyone could sing something of. My late mother often used to play his Greatest Hits album, but then mum used to play all kinds of rubbish. However, if  I never felt the need to watch Robson and Jerome, then there was something about the music of Elton John that resonated.

There still is if this just over two hours is any reliable evidence.

There is still an element of rock n roll danger about “The Bitch Is Back” and “Bennie And The Jets” and if everyone and his gran knows “I Guess That’s Why They Call It The Blues” then it doesn’t alter the fact that it is a hell of an opening trio.

The man himself is still a showman – not quite as flamboyant maybe is in the 1970s, but he can still rock a multi coloured trench coat like the best of them – more than anything, though, he remains an incredible musician. The jam at the end of the wonderful “Levon” showcases the band perfectly, but what follows is pure Elton. His solo at the start of the appropriately soaring “Rocket Man” is magnificent.

Balancing the ones that at this stage of your career you have to play, with the ones you want to is probably the Devils own job, but he pulls it off with aplomb here. Two new ones from the “Wonderful Crazy Night” album – “A Good Heart” the very obvious highlight – and the seldom played “Have Mercy On The Criminal” make their way into the set.

After the latter he is in full on greatest hits mode. “Your Song” belongs to 10,000 here, an emotional “Don’t Let The Sun Go Down On Me” is dedicated to George Michael and features his image on the giant screen, “I’m Still Standing” and “Your Sister Can’t Twist (But She Can Rock N Roll)” are befitting of any artist of this stature.

“Saturday Night’s Alright For Fighting” brings things to a gleeful, almost hedonistic, close. But there’s one left and Norma Jean is done proud with what is a master class of songwriting called “Candle In The Wind”.

Before he plays it, and as he comes out for his encore, Elton John signs as many autographs as he possibly can, seemingly without a care in the world, and since he’s being doing this for 48 years he probably hasn’t.  MV is struck by the amount of young people watching this. A testimony, just like the reaction of the Policewoman, to the universal and enduring appeal of Elton John. The skill he showed here, and his clear appetite for playing are proof that he’s going to be doing this for a long while yet.

And you can tell everybody, that these are your songs.