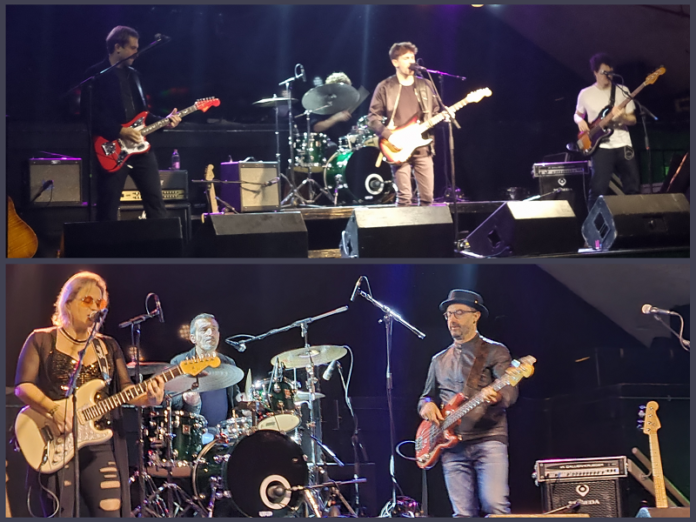 Eliana Cargnelutti is one of those people, you guess, that sees the good in everything. And there’s no doubt that she has an infectious personality, so when she surveys the crowd at the start of her set and says: “Look, it doesn’t matter how many people there is here – just the quality of the people that are watching”, she’s hiding a greater truth.

And it’s a shame, given the quality of the music on show here, that the crowd is as small as it is, but we are where we are.

More of Eliana later, because this is a co-headline show, and its being opened by France’s finest, Felix Rabin. At the end of his hour and 10 minutes, his guitarist Francesco Gagna plays a solo in “Gone”. It’s stunning, but it also gives the first time, really, that you’ve been able to reflect on the band as a whole and not just Rabin.  Yet the man himself has been at pains to introduce them all night. Vincenzo Capodivento on bass and James Morgan on drums are in form here, but you could say they’ve got to be to keep up with Rabin.

The “Pogboy” Album (and I refuse to call it an EP given its scope) had shown that, of course, but here, honestly, its on another level. “Say (You Won’t Leave Me)”, “Moving On” from that record seem to take on a life of their own on stage.

But he’s long had that ability, too. “Little Hurricane” from his 2018 record is given a slow, acoustic driven opening, before switching gear with a soaring riff. The highlight, though, as it was on the album, is “Angels”, the prog thing that is infused with generous helpings of Pink Floyd – and my, the solo! Felix Rabin himself says it was a homage to David Gilmour, but he’s selling himself short. The skill he shows when playing it, deserves to put him and the rest of the band in the Premier League. That’s what this song – and this band – needs. Maybe they’ll get there, maybe they won’t, but nothing devalue the talent on show. Next time Felix and the lads come over, though, bring your mates.

When Eliana Cargnelutti plays “Tush” here, and she begins to – as the Rev Bill might put it himself – play THAT thing she throws her red sunglasses over her shoulder and laughs to her bass player. The woman is having fun.

That word “fun” is something you keep coming back to, because for the hour she’s onstage that’s all there is. That and some brilliant guitar playing. She begins with “Why Do I Sing The Blues” and the answer, basically, is it seems: “because I love it!”

She covers “I Fell In Love” and a genuinely lovely “Angel From Montgomery” the old John Prine number, as well as The Allman Brothers’ “Soulshine”, but she’s an artist with plenty of her own to say too. “My Man” is chunky and funky, while her new album “Aur” (“it means Gold in Italian” she helpfully explains) is mined for a wonderful “I Don’t Know”. On the record it features Ana Popovic and liberal horns, here, though the sheer power of the three piece can’t be denied.

And the last song? “Miss E” – the first song on her first album, and if the rest of the night has been about fun, then this is about skill. She loses herself, on her knees, guitar on the floor, screeching, it seems as if Cargnelutti has found that spot that all musicians want – where nothing else matters.

Really, though, only one thing was paramount tonight. Music. Both of the artists deserve more fame but let’s be clear. If there had been a full 700 in here this evening, Felix Rabin and Eliana Cargnelutti would not have given any more than this.