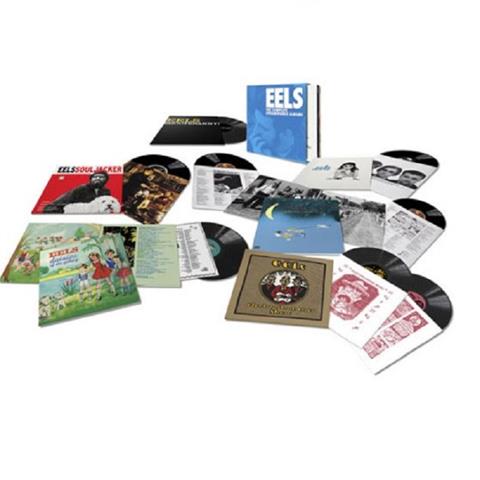 And they are proving it on vinyl

Eels were formed in California in 1995 by singer/songwriter and multi-instrumentalist Mark Oliver Everett, known by the stage name “E”. Often filled with themes about family, death and lost love, Eels’ music straddles a wide range of genres, which is evidenced by the distinct musical style of every album.

They were one of the first bands to sign to DreamWorks and released Beautiful Freak, their debut, in 1996 to much acclaim.  The album featured single “Novocaine for the Soul” which brought Eels international success, most notably in the UK, where it hit number 10 in the UK Singles Chart in February 1997. It also hit number one on the Billboard Modern Rock Tracks chart for two weeks in October 1996, and remained on the chart for 25 weeks.

This set also includes Electro-Shock Blues (1998), a very personal album written largely in response to Mark’s sister’s suicide and his mother’s terminal lung cancer. The title refers to the electroconvulsive therapy received by Elizabeth Everett when she was institutionalized. Daisies Of The Galaxy (2000) received positive responses from critics upon release, and features “Mr. E’s Beautiful Blues” which peaked at No. 11 in the UK Singles Chart.

Souljacker, the band’s fourth studio album, was released in 2001. Unlike some of Everett’s other albums, most notably Electro-Shock Blues, Souljacker is mostly based on stories of outsiders rather than on Everett’s own life. Characters were inspired from various sources, including circus freaks (“Dog Faced Boy”) and a recording engineer with an abusive past (“Bus Stop Boxer”). German filmmaker Wim Wenders directed the video for “Souljacker part I”, which reached #30 in the UK Singles Chart. The second track on the album, “That’s Not Really Funny”, was used as the theme tune to all three series of the BBC’s animated comedy, Monkey Dust.

Shootenanny! was released in 2003, and was recorded in November 2002 live in the studio, with minimal production. The album’s name comes from a neologism coined by E for “a social gathering at which participants engage in folk singing and sometimes dancing [a hootenanny], but mostly the shooting of guns.”

The box set will also exclusively include the first ever vinyl pressing of Electro-Shock Blues Show, a live album by Eels released on tour in 2002. Tracks on this album were recorded at six different venues. According to the album’s liner notes, the first ten tracks were recorded “somewhere in England” during December 1998 while the Eels were a support act for the band Pulp. The other five tracks are brought in from selected performances from around Europe and the United States.

They will also be breaking out all titles (excluding Electro-Shock Blues Show) as Back To Black releases on the same date.