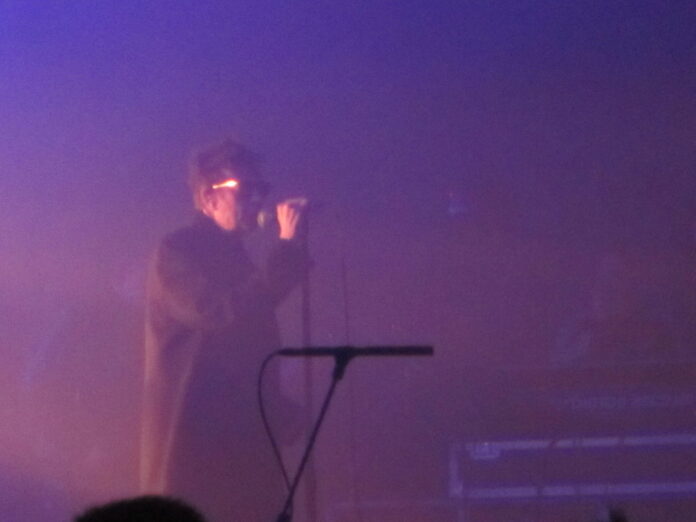 Liverpool`s finest are out on a rescheduled twenty date trek around the UK and Ireland which is strap lined `Celebrating 40 years of Magical songs` and arrived in the countries second city on the final stretch of this tour. I was pondering just before the lights dimmed and the smoke machine kicked in that with this almost throwaway society, would there ever be bands such as Echo who will still be touring with such relevance some forty years on from their creation. Will and Mac are almost old friends whom I don`t get to see much these days but when they turn up it`s like old times.

I first saw Echo & The Bunnymen at the Cedar club in Birmingham in 1980, for some of us a fondly remembered venue in Constitution Hill owned by the legendary Eddie Fewtrell, a former boxer who owned a number of clubs in Birmingham and who passed away this month. I`ve seen them many times since and more recently at the Assembly in Leamington in 2014, Coventry`s Ricoh Arena with the Buzzcocks in 2015 and the Symphony Hall in Birmingham on 26 May 2018 when the singer decided to cancel the gig because it clashed with Real Madrid v Liverpool in the Champions League Final, ironically in Kyiv, Ukraine. A show that was quicky reinstated as fans had travelled from overseas to get there.

The bulk of tonight`s show is from the first four albums `Crocodiles`, `Heaven Up Here`, `Porcupine` and `Ocean Rain` all released in the early eighties. As the fog in the venue briefly lifts there stands our leader in long coat and shades as he shares the wonderful `Going Up` from their debut album and it`s like they`ve never been away. The dreamy `Show of Strength`, thumping `All That Jazz` and mesmeric `Flowers` quickly follow before we have a little banter from the singer and he heads into `Rescue` which sends this packed audience into a frenzy. The faithful sing along with `Bring On the Dancing Horses` which featured in the cult film Pretty In Pink before we head into the hypnotic `Over The Wall` and pretty dark but compelling `All My Colours (Zimbo)`.

The mood is lightened with `Seven Seas`, the quite Doors ish `Bedbugs and Ballyhoo` and to me the quite odd `Brussels Is Haunted`. The midsection is usually a time where we have songs that blend into more familiar classic musings and tonight is no exception. The superb `Villiers Terrace` bleeds into the Doors `Roadhouse Blues` then David Bowie`s `The Jean Genie` before heading back to Terrace. The delightfully contemplative `Nothing Lasts Forever` morphs into Lou Reed`s `Walk on the Wild Side` with the singer changing the lyrics to “take a walk on Merseyside” before slipping back into Nothing.

Tonight`s set closes out with the irresistible `Never Stop` and quite anthemic `Lips Like Sugar` and we are left obviously wanting much, much more. It doesn`t take long before the band return and share one of my favourites in `The Cutter`. Mr McCulloch mumbles something about tranquillity and solitude before revealing that he feels that `The Killing Moon` was the greatest song he`d ever written and launches into it and on the strength of its reception here tonight, it was hard not to agree with him. The group are urged to share one final song and do so with the elegant `Ocean Rain` before exiting the stage after a pretty stunning ninety minutes.

E&TB shows can sometimes depend on the mood or mindset of the band`s unique singer but to me that`s what makes a band like this so special, the unpredictability of each individual event. A friend had attended their performance in Northampton this week and felt it was a kind of going through the motions vibe but was in absolute raptures this evening.

I have to admit tonight was a cracking show and touched all the emotional bases. We had songs to dance to, songs to sing along with and also some to just stand, digest, and contemplate. As I suggested at the beginning, tonight was like meeting up with old acquaintances and that said it was good to catch up with The Bunnymen and I really hope it isn`t too long before they visit us again.