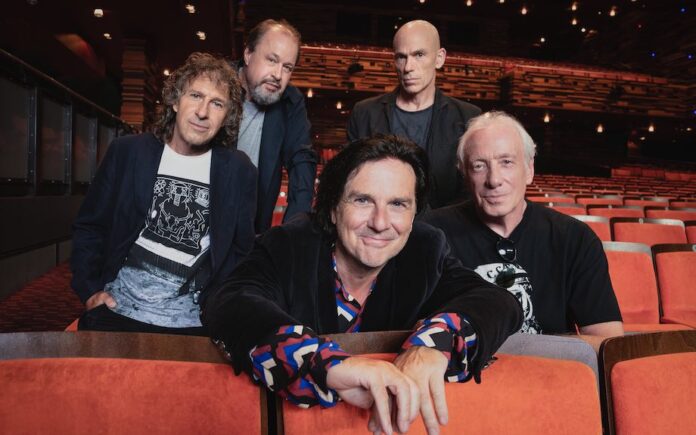 Marillion unleash video for ‘A Friend For The Earth’,  coinciding with Earth Day 2022 and following the  release of their chart-topping album ‘An Hour Before  It’s Dark’.

WATCH THE OFFICIAL VIDEO FOR ‘A FRIEND OF THE EARTH’ HERE:  https://youtu.be/LQW2VrCrCAI Hamburg, April 22nd, 2022

“Don’t wanna say goodbye
But I’m watching the time
The flowers and the bees
Vanishing beneath our feet”
If you dive into Marillion’s extensive catalogue, you will find several songs that take on  the topic of environment and humanity’s impact on it. The 1989 album and title track  ‘Seasons End’ is only one of many examples.

Now, over 30 years later, in times of ‘Fridays For Future’, an ongoing pandemic and a  general big uncertainty about the future of humanity, the topic does not lack relevance – quite the opposite!

Coinciding with Earth Day 2022, Marillion today release a new video accompanying what  is chapter two and three of ‘Reprogram The Gene’, a song released on their new album  ‘An Hour Before It’s Dark’ on March 4th, 2022.

While the song and video deliver a clear message on the one hand, Marillion also leave  room for everyone to have their own flavour of what the words of this song are about.

Steve Hogarth about ‘A Friend Of The Earth‘:
“We are not of the heavens. We are of the earth. And whether you like it or not, when it  dies, it’s gonna take you with it. The planet is screaming in our faces like an approaching  express train. Some of us can hear it but don’t listen. Some of us can’t even hear it. But  getting out of its way is our only hope.
We’re at a tipping point right now.
Not to act, is suicide.”

Too self-righteous? How about: Turn the thermostat down and eat more veg.”

With ‘An Hour Before It’s Dark'”, Marillion released one of their most upbeat albums of  their career while, at the same time, they once again did not shy away from  uncomfortable topics, reflecting on their own behaviour, and putting their finger in the  wounds of time.

The album topped the album charts worldwide, breaking the band’s chart records in  several countries. In Germany and the Netherlands ‘An Hour Before It’s Dark’ went  straight to #2 in the official album charts, making it the highest chart entry for the band in  both countries to date, while in the UK the band also celebrated #2 in the official charts,  their best chart position in over 30 years!

Marillion will embark on a major European and UK tour in autumn 2022, preceded by  several Marillion weekends until summer 2022.

Tracklisting:
1. Be Hard On Yourself
i. The Tear In The Big Picture
ii. Lust For Luxury
iii. You Can Learn
2. Reprogram The Gene
i. Invincible
ii. Trouble-Free Life
iii. A Cure For Us?
3. Only A Kiss (Instrumental)
4. Murder Machines
5. The Crow And The Nightingale
6. Sierra Leone
i. Chance In A Million
ii. The White Sand
iii. The Diamond
iv. The Blue Warm Air
v. More Than A Treasure
7. Care
i. Maintenance Drugs
ii. An Hour Before It’s Dark
iii. Every Call
iv. Angels On Earth