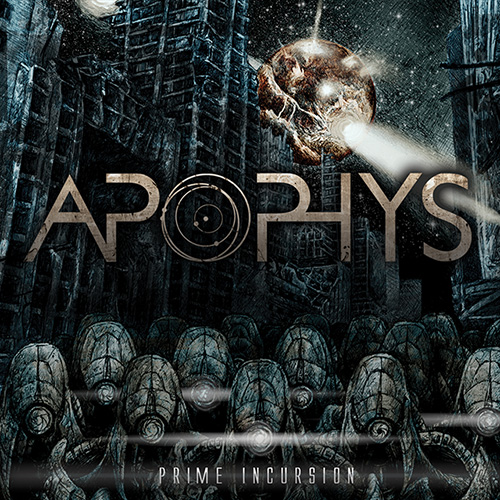 Dutch death metal practitioners, APOPHYS (ah/po/fihs) – who feature within their bestial ranks members of God Dethroned, Prostitute Disfigurement, Detonation and Toxocara among others – are readying to release their debut full-length, Prime Incursion, this Spring via Metal Blade Records.

A word derived from Apophis, an asteroid that, upon initial observations, indicated a probability that it would hit Earth on April 13th, 2029 causing a collision of immeasurable proportions,APOPHYS was forged in 2012 and have since been surgically carving their path within the annals of the modern death metal scene. Prioritizing song structure above technicality, APOPHYS manifests an audio assault that’s at once vicious, guttural and meticulously-arranged yet wholly organic and infectiously memorable recalling the repugnant charm of death metal legends like Cannibal Corpse, Suffocation, Immolation and Pyrexia. Mixed by vocalist Kevin Quilligan and mastered by Stefano Morabito at 16th Cellar Studio (Fleshgod Apocalypse, House Of Penance etc.), the band’s forthcoming Prime Incursion long player boasts nine sadistic hymns of Sci-Fi-tinged death metal centered on themes ranging from transcendental travel, rapid evolutionary progression, and global epidemics, to artificial intelligence in all-out war with their maker.

Comments Quilligan: “The thought of our planet floating through a galactic minefield makes me think about how frail our existence really is. And where some might consider this to be a negative and demotivating thought, I used this realization to create something truly apocalyptic; a full, self-sufficient death metal machine in which I as a person am frail, but as part of this more powerful than ever. This is APOPHYS. We are coming.”

Prepare for the takeover with third cut, “Requiem For The Absurd,”

APOPHYS‘ Prime Incursion will be released on April 7th, 2015 via Metal Blade Records. Preorder bundles are available today at THIS LOCATION with further APOPHYS intel to be released in the coming weeks. Stand by.