The new Dunderbeist album is finally done; it has taken the hard-hitting Norwegian quintet two years of blood, sweat and tears.

The result is exceptionally complex in its simplicity, still keeping their snappy hooks and tongue in cheek humour. The album“Hyklere” (English translation: Hypocrites) presents you a ripened Dunderbeist sound, a dive into the darker aspects of life. Brutal and honest, their most personal and greatest work to date! «Hyklere» will be out on March 2nd.

As is traditional for the band, Dunderbeist will hold their release concert on Gregers in their hometown Hamar in Norway. The date is set to the 28th of Feb.Tickets include the CD or LP.

Dunderbeist are also announced for the Tons Of Rock Kick Off on Jan 29th and theTons Of Rock Festival 2015 in Halden (NOR)!

Pre-orders of «Hyklere» CD, LP and clear blue LP, and the ticket bundles for the release concert are all available on dunderbeist.indierecorings.no now! 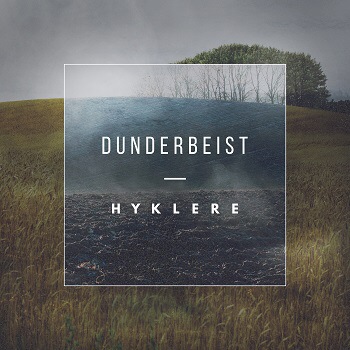 As the artwork perfectly illustrates, its theme spins around human’s dark inner. The new album is mixed by Vincent Sorg (Kreator, Die Toten Hosen, Oslo Ess) and all lyrics are in Dunderbeist’s native tongue, with its raw and brutally honest touch from their local woodlands of inner Norway.