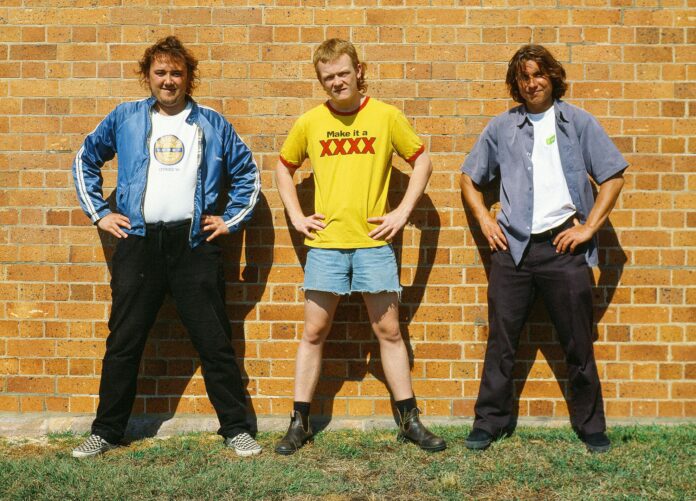 Aussie punk trio, The Chats have released a rocking new track from their forthcoming second album, GET FUCKED set for release worldwide on August 19th via Bargain Bin Records.

Clocking in at just 89 seconds, the rip-roaring, ‘I’ve Been Drunk In Every Pub In Brisbane’ is an entirely unironic celebration of frontman Eamon Sandwith’s first year or two in his new home city.

Watch the video shot under the influence by the band and their house mate, Rick – who is also in a band with Eamon and Josh called Rick and the Sickos. The track is also streaming here.

“Brisbane is quite a bit hotter than the rest of the country,” says Eamon, “so it’s one of those places where it’s more acceptable to start drinking earlier. I reckon there would be 900 or so pubs that you would have to hit, and I have actually been to a good chunk of them, but if you were go to all of them, it would be hard to even remember which ones you’d been to, and which ones you hadn’t, especially if you’d got fucking pissed.”

The Chats will get a chance to sink more cold beer across Australian and New Zealand cities this November/December, as the band also announce today, they will be joining Guns N’ Roses as main support on eight stadium shows. Check all dates below. Yep, you read that correctly…

Undeterred and now stocked to overflowing with frustration and fury, The Chats are about to strike back with their second long-player called GET FUCKED – an incendiary, hyper-adrenalized blitz from punk heaven, showcasing an electrifying all-killer-no-filler 13 tracks which perfectly capture the band’s explosive energy. It is, quite simply, another laugh-out-loud, pogo-through-the-floorboards stroke of motherfucking genius.

Now with two full albums’ worth of all-new road-ready hyper-melodic punk-rock-‘n’-roll bangers up their sleeve, the band are set to tour across the globe this year and whip up all the pogo-party euphoria necessary to kill off COVID-19 for keeps. After all the incarceration and boredom, The Chats are in peak match fitness to deliver the excitement we all crave for the months ahead.

Pre-order the new album GET FUCKED at https://www.thechatslovebeer.com.