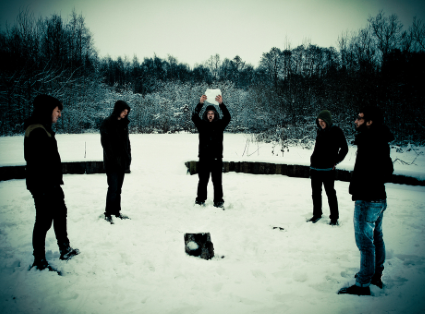 Opium Lord’s surroundings reflects their sound, born out of a small industrial town in The Black Country, in the shadow of the of the Birmingham suburbs where the genre was created; they play dark soul mailing avant sludge blending doom and math to construct their original sound.

2013 was a busy year, releasing a now sold out debut EP, playing numerous UK appearances including Supersonic Festival and headlining a tour of mainland Europe. It’s safe to say they made some pretty bold statements in what was only their first year and a half of formation.

Their debut EP “The Calendrical Cycle – Prologue: The Healer” reached critical acclaim for a two track taster of what is to come, including Terrorizer Magazine awarding it top marks in a review.
Candlelight Records will see the band’s first full length “The Calendrical Cycle: Eye of Earth” which promises to be far more in depth and crushing than its predecessor.

The band had this to say

“Candlelight has produced some of the biggest bands in metal since its inception, so it’s an absolute honour to join the ranks to carry on our journey.  We have done a lot since we formed this little band in The Black Country and we have had a lot of support along the way, we instantly felt at home talking with the guys from the label and relationships are important to us, so here we are, signed Candlelight because of that mentality.  Our debut album The Calendrical Cycle: Eye of Earth shall be with you via Candlelight Records soon.”