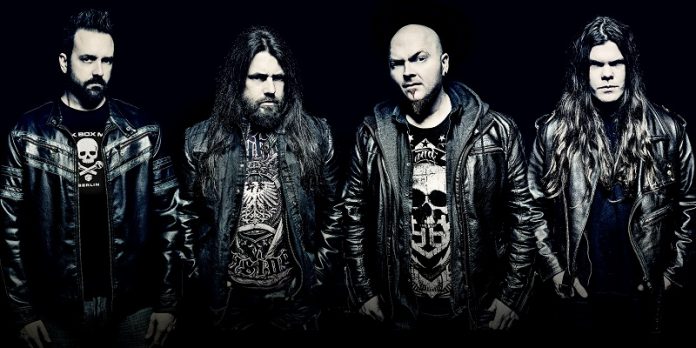 Another new song from supergroup

In a thrash world gone metalcore, blackened or conversely, NWOBHM-scrappy, it’s hard justice indeed that a band of brothers has come together to champion songwriting, performance, production, arrangement and even sequencing this forthrightly, Meshiaak bestowing on the scene an egregiously confident and “old soul” record that evokes the magic of Ride the Lightning, Rust in Peace, South of Heaven and Burn My Eyes. Debut album ‘Alliance of Thieves’ will be released on 19th August 2016 via Mascot Records/Mascot Label Group (Black Label Society, Black Stone Cherry, Monster Truck, Counting Days, Stoneghost)

Formed in Melbourne, Australia by 4ARM’s Danny Camilleri and Teramaze’s Dean Wells, the band is rounded out by bassist Nick Walker and major rhythmic weapon Jon Dette, of Iced Earth, Slayer and Testament fame, not to mention his gig as temporary replacement for an injured Charlie Benante in Anthrax. It is the combination of the embarrassment of riches—and richness of ideas—embedded in the songwriting team of Tombs and Wells, with the band’s warm and yet locked-down rhythmic beds that conspire to make tracks like groovy thrasher “Chronicle of the Dead” and conversely the textured and proggy “At the Edge of the World” so easy-drinking and yet thought-provoking of detail.

“I would have to say that ‘At the Edge of the World’ would be the one we’d love to get out there as a single,” notes Danny, on a panoramic journey of a song that has everything, including sophisticated arrangement, epic sweep and astonishing lyrical depth. “It’s the kind of song that would speak to people on a lot of different levels, something that most people would be able to connect with fairly easily. It’s a song that is very close to me personally, especially when it came to the lyrics. It’s where I’ve found myself in the last three years and my moments of doubt, trials and frustrations concerning experiences I’ve had to go through over that time.”

“It Burns at Both Ends” marries, incredibly, Maiden to Lamb of God and Slayer and world music sophistication in yet another demonstration of professionalism grounded by the unbreakable rules of strong songwriting. Notes Danny, “‘It Burns at Both Ends’ is probably the most aggressive and angry song on the album and is always a good release for me. I’ve struggled with anger issues for most of my life and though I’ve come a long way in recent times concerning it, I just feel that I was able to vent in that track more than the others. Every time I hear the song I can still remember exactly what I was thinking when I was tracking it; however what I was thinking is probably not something I should put in writing (laughs). But I’d have to say, ‘I Am Among You’ would be the most experimental track on the album; it just has so many different layers to it and is fairly unpredictable. Vocally it doesn’t really follow a particular pattern until it hits a chorus; each verse structure vocally is different and with vocals over an odd time signature before half-timing and mellowing-out in the middle of the song. It’s just a different kind of track and not really something I’ve heard done a lot.”

An information-packed construct such as this would not have translated into the effortless headbang that it is without the level of audio fidelity that is achieved throughout this highly crafted collection of fairly lengthy songs.

“We went with keeping the sound as band-orientated and organic as possible, but with using a lot of modern technology,” explains Dean. “It’s a blend of old and new because we recorded to two-inch tape for the drums through an old Neve desk, but the rest of the album was produced in my home studio. We also went with a mixer named Jacob Hansen who is known for a lot more progressive music. But I think the combination really gives Meshiaak a new and fresher sound than most traditional thrash albums. And so we’ve tried to create something fresh amongst the guidelines of traditional metal and thrash with some progressive elements, although at the same time we wanted to make music feel like when we first discovered bands like Megadeth, Metallica, Machine Head etc., even Alice in Chains and Slipknot.”

“But I’m the more progressive guy in the band,” laughs Dean. “I have a lot of influences outside the metal world such as Tool and Dream Theater, and a lot of guitar instrumentalists as well like Guthrie Govan and Joe Satriani. At times I had to be brought back into line to keep things metal and exciting (laughs). I think that’s what makes Meshiaak unique—the melting pot of influences we have. So as time went on during the writing process, Meshiaak took on a life of its own. But it seems a lot clearer now that what it is, is extremely intense music combined lyrically with some of today’s hard subjects and hidden truths.”

As for Dean’s picks for album highlights, he goes with “At the Edge of the World” and “Drowning, Fading, Falling,” the latter being yet another showcase for Danny’s almost Mike Patton-level versatility of vocal along with artful twin leads and Friedman-esque melodies, all atop pummelling rhythms from one of thrash’s top-shelf drumming legends. “Both those songs, to me, really capture something intangible that is hard to describe,” says Wells. “They are the most personal to me and really give off an awesome vibe and they just sound crushing (laughs). If we were to pick singles, it would be those tracks, because basically they have all the elements one could want from a modern day metal band but with an old school philosophy.”

“I’m all about being able to feel music, not just listen to it,” says Danny, summing up the Alliance of Thieves experience. “That’s what has been so cool about this whole thing—the fact that I can feel something in each song really just blows me away and leaves me with a sense of satisfaction unlike I’ve had in any of my previous work. All of the music and songs on this album basically span the last three years of my life. Some of them demonstrate a little more in depth than others. It really is a very personal album for me and somewhat therapeutic. To say that music has saved my life is a total understatement. I wore my heart on my sleeve in some of these tracks and I couldn’t be happier with the outcome. Writing and tracking this album really gave me strength and purpose at the times I needed it most.”