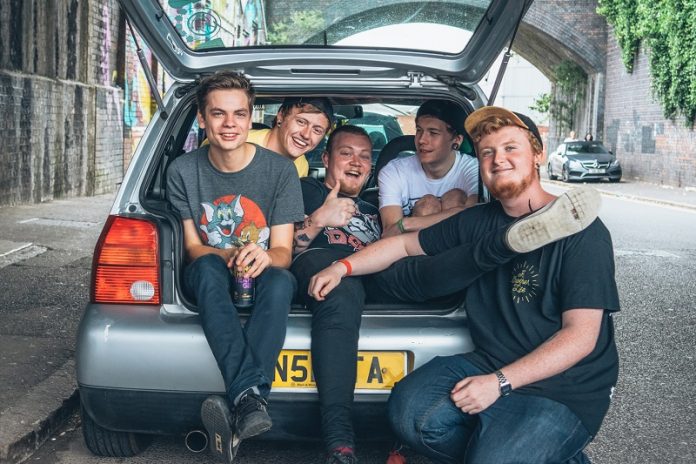 September 3, 2016
Reading time: 2 min.
Facebook
Twitter
Pinterest
WhatsApp
Linkedin
Email
Print
Telegram
Copy URL
By Andy Thorley
Brummie  pop punks reveal new track
Birmingham Pop Punk Quintet You Know The Drill are pleased to announce details of their debut EP ‘Losing Streak’, which will see release on 28thOctober. Available digitally and physically via Scylla Records, the title is derived from a lyric on their lead single, ‘Less Than You’.
Vocalist Benji Yapp explains: “We felt it was a relevant title as it relates to the hard times in life that everyone goes through, where it just seems to be one bad thing after another.”

But You Know The Drill aren’t all doom and gloom, the band – completed by Damo Darby on Bass, Brad Potter on Drums and guitarists Jim McCormack & Luke Astley – have a simple mantra: “if it isn’t fun then what’s the point?”. Initially starting out as a hobby and having only previously released a few tracks they regard more as demos, Yapp declares: “We don’t like to take ourselves too seriously and feel that music is very often approached with a straight face, which is why we try to infuse as much fun and laughter into everything we do, whether it’s music videos, our live shows or even just hanging out with fans.” ‘Losing Streak’, however, sees the band stepping up their game, with Yapp stating: “We are essentially treating this as our first proper release as it is the music that has had the most hard work, effort and love put into it. We are crazy proud of it and every song on it is special to us in one-way or another.”

Recorded with Drew Lawson at Steel City Studios in Sheffield, the quintet enlisted a little help from their friends in the pop punk community, with Alex Adam of ROAM helping to refine the material; Grant Berry formerly of Me Vs. Hero on mastering duties, and Neck Deep’s Fil Thorpe-Evans lending his skills for the artwork. But, it’s really the songs themselves that are the pop punk guests of honour at this genre summit, You Know The Drill batting for the rafters with their energy laden guitar and drum attack. With vocal hooks left, right and centre, particularly so on their big-room-ready choruses, YKTD will have everyone singing along in no time.

Previous article
99 In The Shade
Next article
Words Of Violence