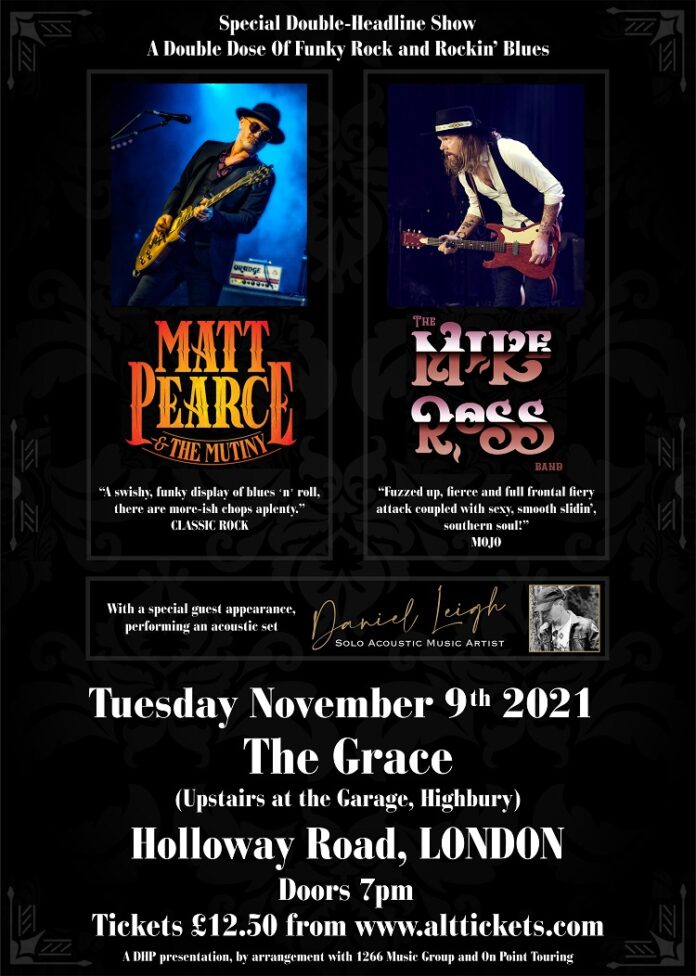 A killer combo of talent comes together for a double headline show, upstairs at The Garage at The Grace in Highbury on 9th November.

Matt Pearce and Mike Ross —with their respective bands Matt Pearce & The Mutiny and the Mike Ross Band — willshare the stage for a double headline gig, bringing together two highly original, exciting artists for an awesome evening, along with a special guest support opening the event.

Matt formed Matt Pearce and the Mutiny to pursue his goal of creating what he calls “a Funky Souladelic Blues Rock Jam Thing…!”

Maximum Volume described the resulting debut album “As if Prince is jamming with Bonamassa. One of the most confident, classy and promising blues debuts in ages.”

“Think Stevie Ray Vaughan guesting with Gov’t Mule,” said Bluesdoodles in their 10/10 review, “and you are getting close to the excellence on display..”

Mike Ross, meanwhile, is a musician with many facets. Not only is he an acclaimed Heavy Blues guitarmeister and a top-tier wizard of fuzz (particularly as one third of power trio supergroup RHR), he’s also a talented solo artist, multi-instrumentalist, vocalist, songwriter AND producer. This killer combo of talents created Mike’s critically acclaimed album ‘The Clovis Limit Pt.2’.

ERB Magazine raved over ’The Clovis Limit Pt.2’, particularly its “great lyrics, wonderful use of keyboards and of course the guitar(s)… One of  the best albums of 2020! Magic Mike Ross does it again!”

The double headline gig at The Grace will be the first Central London show for both Matt and Mike since COVID kicked in and impacted so drastically on live touring and gigs.

“This show at The Grace is important for two big reasons,” says Mike Ross, “It’ll be the first show I do with Matt and his band (and I can exclusively reveal that we have big plans together for 2022!) as well as being the last MRB show of this complicated and far from usual year. Can’t wait to crank up the amps and give 2021 an electrifying send-off so we can all look forward to a busier and more prosperous year to come, so come and celebrate with us!”

“We all need live music!” proclaims Matt Pearce, “We need to play it and we need to see and hear it. The community needs to reunite and bring the music back.

“With that in mind I’m super-excited to be returning to the scene of my first London headline show: this time with the awesome Mike Ross and his band for a night of rocking, funking bluesy rock — just what London needs to warm itself up on a cold November Tuesday night!”

In addition to the dual headliners, London-based singer/songwriter, Daniel Leigh (best-known as the lead vocalist of rock bands New Device and Jordan Red) will perform a solo acoustic opening set.

Throughout lockdown Dan has been entertaining fans around the globe, online every weeknight, with his unique take on some classic covers and his own material. With over 3½ million reach worldwide on his streams, over the last 18 months, Dan is reaching new audiences daily. Check him out over at http://www.facebook.com/danielleighmusic,

Book early for this excellent evening and coming together of talents to create some awesome music!