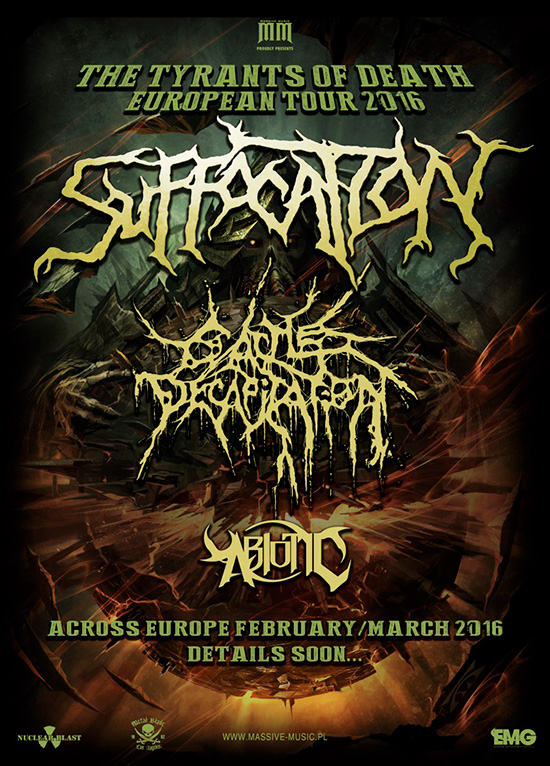 CATTLE DECAPITAITON will join SUFFOCATION on their European run in 2016. ABIOTIC completes the line-up that will destroy Europe under the banner of “The Tyrants Of Death“.

This will be the first European tour of CATTLE DECAPITATION in support of their latest masterpiece “The Anthropocene Extinction“!

Comments CATTLE DECAPITATION singer Travis Ryan: “We’re happy to be doing another European tour with our good buddies SUFFOCATION and our new friends ABIOTIC! Its been a while since we’ve been to Europe and we have an arsenal of new songs ready to pummel you with! See you soon Europa!”

SUFFOCATION are just as excited! “Suffocation is gearing up to head to Europe in February 2016 and bring forth the devastation one more time and this time we’re bringing the unstoppable wrecking ball, CATTLE DECAPITATION with us! This will be a MASSIVE tour of speed, heaviness and straight chaos combined with devastation of a NUCLEAR BLAST! This tour will be one for the die hard metal fanatics bar none. Hope to see you there and witness the pure carnage unfold!”

Comments ABIOTIC: “We are both honored and humbled to announce our first European tour in support of Cattle Decapitation and Suffocation. The excitement that we have to play in a part of the world that we’ve never been to is beyond words. We can’t wait to finally meet all of our European fans and make some new ones!”

Dates will be announced soon!

Order your copies of CATTLE DECAPITATION‘s “The Anthropocene Extinction” now atmetalblade.com/cattledecapitation. Go online and check out music and videos at the same location!