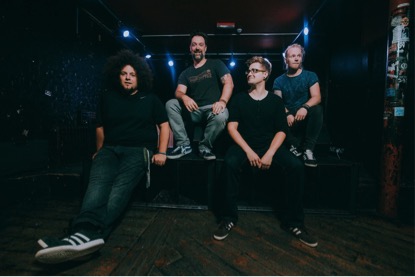 Brighton hard-proggers DORJE have dropped a brand new video and announced a full tour of the UK.

“We can’t wait to get back on the road in November and play our new EP ‘Centred and One’ live.” Comments bassplayer Dave Hollingworth. “We’ll be showcasing some new material and rocking some old favourites too!”

The biggest band you’ve never heard of, DORJE’s first EP ‘Catalyst’ was self released in November 2015 with great success, debuting at #1 on the iTunes rock chart, #8 overall and #3 on the Amazon charts here in the UK and charted in 44 countries, including in the Billboard Charts in the US, worldwide.

The line up of muso stars is completed with DAVE HOLLINGWORTH (bass) BEN MINAL(drums) AND RABEA MASSAAD (guitar) who also have a large YouTube following, with the band collectively receiving over 4 MILLION VIEWS PER MONTH.

Taking influence from blues, jazz, metal and everything in between, comparisons could be made to Audio Slave, Karnivool, Tool or even Queens Of The Stone Age, but with a distinctly modern twist. Solid yet subtly complex drums and big bass grooves lay the foundation for the low-tuned blues inspired riff-wizardry that weave a tight web to support the huge hook-laden vocals. And of course, the occasional face-melting solo.

Catch DORJE at the following shows: