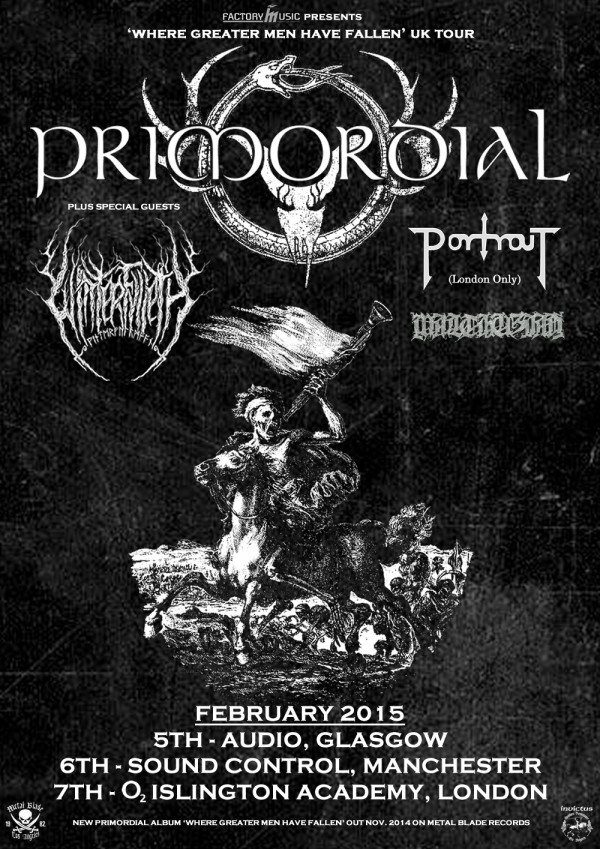 PRIMORDIAL will bring their audio divinity to stages throughout Europe in the coming weeks with additional live ceremonials to be announced soon.

Watch the outstanding black and white clip here: http://metalhammer.teamrock.com/news/2014-11-24/primordial-unveil-stunning-new-video
Where Greater Men Have Fallen serves as the follow-up to PRIMORDIAL’s globally-revered, 2011-released Redemption At The Puritan’s Hand long player and their eighth studio offering overall. Dubbed, “almost Maiden-esque in its majesty,” by Stereogum, the eight track, fifty-eight minute magnum opus was recorded at Grouse Lodge in Dublin with Jaime Gomez (Cathedral, Angelwitch, Grave Miasma) and delivers some of PRIMORDIAL’s deepest, most meticulously composed, thematically profound and plainly absorbing compositions of their winding catalog of sonic enormity. Rolling Stone gushes in a recent review, “Alan Averill is a vocal powerhouse, soaring atop melodic black/folk metal compositions that channel doom and gloom as well as triumph. ‘Ghosts Of The Charnel House’ embodies heavy metal grandeur, while title track ‘Where Greater Men Have Fallen’ is an epic lament, its mournful, repetitive melodies rooted in Irish folk. When Averill howls, ‘The heart of your motherland will be ripped from her chest,’ a million ghosts cry out with him.'” Empty Lighthouse Magazine notes, “The title track builds and builds until vocalist Alan Averill lets out a commanding wail and the riffs crash onto the listener like waves. Guitarists Ciaran MacUiliam and Michael O’Floinn have a way of making a full-bodied ‘epic’ sound through subtle tonal shifts and chord voicings, culminating in a feel that most bands spend dozens of Pro Tools tracks and computer effects trying to achieve,” while Decibel Magazine adds, in an 8/10 rating, “Greater men have fallen, but PRIMORDIAL rise.”