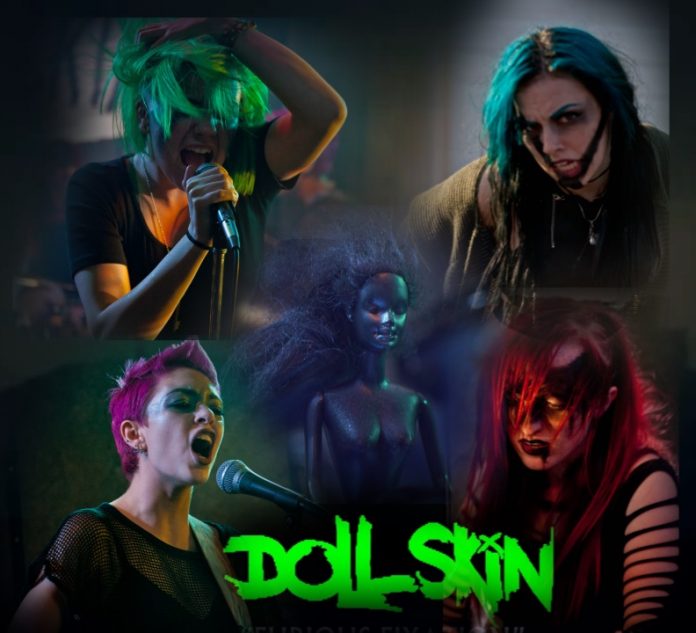 The video was shot entirely on location near Gettysburg, Pa and includes exclusive video footage from Wasteland, who in turn invited the band to play at their Wasteland Weekend event in September. Details can be found here: http://www.wastelandweekend.com/wasteland-weekend-2016-dates-announced/

“We are so beyond excited to be a part of the crazy world that is Wasteland Weekend! It’s been a dream of ours to play this for a long time, so it’s pretty surreal. They were so generous with their footage for our music video, we couldn’t be happier with how it looks.” -Meghan Herring/Doll Skin

Todd Chamberlain of High Rock Pictures who directed the video said, “It is with great pleasure that I present this music video for release and distribution. Working with Doll Skin and David Ellefson has been an incredible honor. The girls of Doll Skin are true performers and they worked so hard on this video. It was a long day on set, and everyone held up like a trooper. To say that the girls of Doll skin are talented is an understatement. Not only are they musically inclined, but have a good sense of what is needed for other aspects such as filming, and they have their act together better than half the people I know three times their age. I can’t wait to see what the future holds for these young ladies.”

“Furious Fixation is a powerful song about the fall of society all around the world and how it becomes like the dystopian society you see in the movie Mad Max. The song gives you the feeling that you’re a part of this society and you’re having to fight for your survival.” – Sydney Dolezal/Doll Skin

Cameos in the video were graciously provided by:

Jim Krut: The Helicopter Zombie in George Romero’s (God rest his soul) original 1978 Dawn of the Dead. Jim has many acting credits and is still active in the business, including co-starring in High Rock’s upcoming Indy horror flick “Sideling Hill”. He is also active on the Horror con circuit, attending many shows each year to meet with the fans. Jim is also a Vietnam Veteran.

Vernon Wells: Vernon has a long and distinguished acting career. He is from Australia and is one hell of a kind hearted gentleman. He appeared in “Mad Max 2: The Road Warrior”(1981) with Mel Gibson, “Weird Science”(1985), and “Commando”(1985) with Arnold Schwarzenegger, and much, much more. We are extremely grateful and honored to have him in this video.

IN YOUR FACE AGAIN was released this week on limited edition vinyl in 4 colors, Pink, Green, Blue, and Red, available from select retailers and empmerch.com

The video can be seen here: http://bravewords.com/news/exclusive-doll-skin-premier-mad-max-inspired-video-furious-fixation

Currently, the band is on the “Equal Rights, Equal Lefts” Tour with Otep.