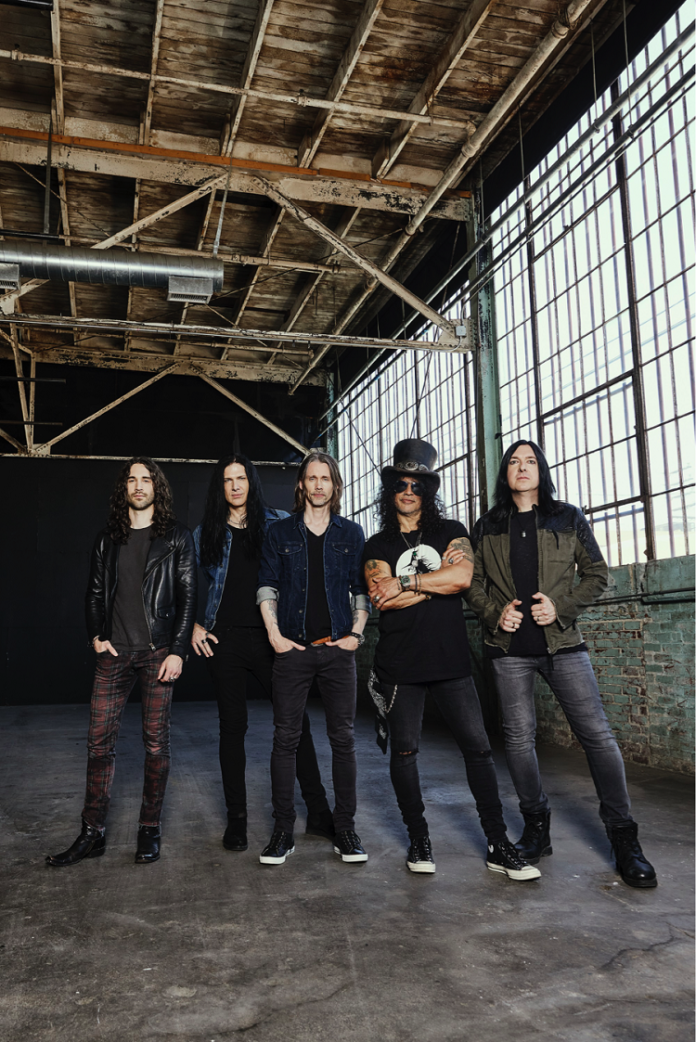 SLASH FT. MYLES KENNEDY & THE CONSPIRATORS have released new song “Call Off The Dogs,” from their upcoming album titled 4, which is due out February 11, 2022, on Gibson Records,in partnership with BMG. The new song follows the first single“The River Is Rising,”the fastest-rising radio debut of SLASH’s career cracking the Top 20at Rock Radio at #13 this week and climbing. A decade and four albums into their career, the new album 4 marks the first new music from the group in four years.A vibrant rock album fueled by memorable guitar hooks and compelling melodies, big choruses, and even bigger riffs; 4 builds on the legacy of SLASH FT. MYLES KENNEDY & THE CONSPIRATORS’ prior work. 4 isSLASH’s fifth solo album, and fourth with SLASH and his bandmates MYLES KENNEDY (Vocals), BRENT FITZ (Drums), TODD KERNS (Bass & Vocals)and FRANK SIDORIS (Guitar & Vocals). Listen to “Call Off The Dogs”HERE,and “The River Is Rising” HERE, and pre-order the new album 4, HERE.

SLASHdescribes the new song “Call Off The Dogs,”“This one was written pretty much on the fly, and in the spirit of the energy of the whole album 4. You can’t overthink something like this song, because it kills the spirit. When we got into pre-production, ‘Call Off The Dogs’ came together fairly quickly – just jam it and that’s basically it. And it was probably the last thing that we recorded in the studio.”

MYLES KENNEDY adds, “‘Call Off The Dogs’ has that up-tempo vibe that helps elevate a record in a lot of ways, especially for rock fans. They want those songs. We needed a chorus section for it, so I messed with it a bit and sent it to Slash, and he took it to the next level and made it his own. Lyrically, it’s about that point where you wave the white flag and give in to someone after being pursued relentlessly.”

For 4, SLASH and the band traveled across the country via bus together to Nashville, TN, and recorded the new album at the historic RCA Studio A with producer Dave Cobb (Chris Stapleton, John Prine, Jason Isbell, Brandi Carlile), revealing a stunning new sound and style all captured live in the studio. Cobb shared the band’s desire to lay down the tracks live, in the studio including guitar solos and vocals–a first for the group. The band’s previous albums over the last decade Apocalyptic Love, World on Fire, and Living The Dreamhave continued on an upward trajectory, all achieving Top 5 Billboard charting debuts in the U.S. and reaching the Top 10on 12 major charts across the globe. To date, the three SMKC albums have now garnered 7 consecutiveTop 10 Radio singles, spawned sold-out world tours, and have earned SLASH and the band the best critical acclaim of their career with their latest album Living The Dream(2018) singled out by the Los Angeles Times, Classic Rock, Guitar World, Loudwire, LA Weekly, and more, as their best songs to date.

In light of the 30-year alliance between Gibson and the GRAMMY Award-winning, Rock and Roll Hall of Fame inducteeSLASH, the new SMKC album 4, has the added distinction of being the first-ever album release on Gibson Records, the new label, which is headquartered in the iconic American instrument brand’s hometown of Music City, Nashville, TN. On February 11, 2022, Gibson will commemorate SLASH FT. MYLES KENNEDY AND THE CONSPIRATORS’first studio album with Gibson Records, with a limited–edition release of the SLASH Les Paul Standard 4 Album Edition guitar and package. Only 250 Slash Les Paul Standard 4 Album Edition guitar swill be available worldwide on www.gibson.comand at select authorized Gibson dealers. The unique guitar package also features the new SMKCalbum 4 on vinyl, a 4 album guitar pick tin and decal, and a signed SMKC band portrait. View the current line of album packages available for 4,HERE.