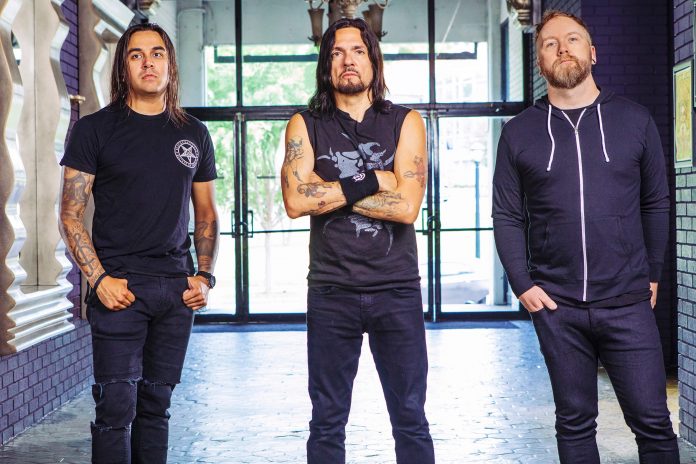 American power trio PRONG have revealed their new single and music video, ‘Divide And Conquer’, taken from the forthcoming new album ‘Zero Days’, due for release this July 28th via Steamhammer / SPV.

Constantly refining their ironclad grooves and monstrous riffs, ‘Zero Days’ marks Tommy Victor’s fourth album of all new PRONG works, and his sixth recording project in just five years. Describing him as being at his most prolific is an understatement.

Speaking of the new single, Tommy Victor says, “Hey our new single DIVIDE AND CONQUER is a fist pumping sing along. We think of it as a modern day anthem. It’s catchy, but it’s pissed off.”

Returning from self-prescribed hiatus in 2012, PRONG blew the hinges off the door with the release of “Carved Into Stone”, combining their distinct mix of thrash, hardcore and industrial metal with a new urgency and angst that struck a deep nerve with the band’s loyal fan-base, and beyond.

2014’s “Ruining Lives” quickly followed to high acclaim, cementing tracks like “Turnover” and “The Barriers” as now staples in their live set. Whilst 2015’s “Songs From The Black Hole” covers album saw PRONG ever-game to make the unexpected move. The album featured songs from artists as diverse as Hüsker Dü, The Bad Brains, Black Flag, The Sisters Of Mercy and Neil Young.

Following a bone-breaking world touring schedule, PRONG dived back into the studio and cut 2016’s “X – No Absolutes”. Just days after mixing was completed, PRONG went back on the road with Danzig and SuperJoint Ritual in North America, followed by another worldwide tour, this time as special guest to Obituary and Exodus in Europe, and to Testament and Sepultura in North America.

‘Zero Days’ was produced by Tommy Victor himself, with trusted collaborator Chris Collier as co-producer and engineer, speaking of the album’s conception, Tommy says:

“A lot of effort was put into this new “Zero Days” recording. From the minute I would get off tour, I would consolidate ideas from the road and form new ones. Again the focus was on creating good songs. We wanted this record to be modern, as well as holding justice to all the previous releases. Again, and maybe even more than normally, I went crazy meticulous with the lyrics. I had built up a lot to say and I wanted to articulate that in the most intelligent way possible. I firmly believe the mission was accomplished all around. We are really pleased with the performances on this record, as well. It’s a solid outing. We have the anthems, the bangers, the thrashers, the grooves, everything that makes up a PRONG record. It’s definitely a record to listen to start to finish!”

PRONG are currently touring Europe and will begin their UK shows on July 18that Glasgow’s Audio and on the dates listed below.