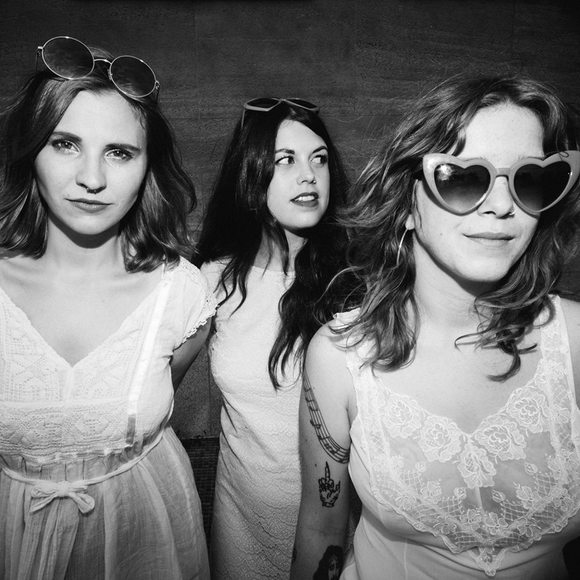 24/7 DIVA HEAVEN is a brand new band from Berlin, Germany, formed by members Kat, Mary and Karo. Influenced by the sounds of the 90s Hard Rock Scene, this band is made up of 3 talented members who all come from the Stoner Rock and Metal scene. However these ladies decided to try something different with 24/7 DIVA HEAVEN.

Inspired by bands such as L7, Bikini Kill, The Melvins, Nirvana, Dinosaur Jr or Sonic Youth, 24/7 DIVA HEAVEN play a pure blend of Hard Rock, Grunge and Punk Rock which is all bounded by the legendary Riot Grrrl sound. 24/7 DIVA HEAVEN have just finished recording their debut EP SUPERSLIDE and it’s set to be self-released on September 6th 2018!

With a delicate and true LO-FI sound that allows 24/7 DIVA HEAVEN to create an almost classic 90s Hard Rock sound but with a modern sounding edge. The EP was recorded at Wasted Life Studios in Darmstadt / GER (Recorded, mixed & mastered by René Hofmann). Says vocalist and guitarist Kat:”We are super psyched to finally announce the upcoming release of our debut EP “SUPERSLIDE”! This 5-track collection should give an impression of what 24/7 DIVA HEAVENS music is about: roughness, intuition & spontaneity. Influenced by alternative rock from the 90’s, we wanted to combine various styles we love to create a modern version of a sound that contains all the ingredients that (we think) made the 90’s to one of the most important decades for rock music: Heavyness & a touch of pop-appeal at the same time! Consequently, this EP was recorded live, one-take and analog on tape machine. SUPERSLIDE is for all people who like it loud. Enjoy! ;)”

To get some first appetizer and how the recordings went, the band just released a studio teaser.

SUPERSLIDE is an action-packed ride with 24/7 DIVA HEAVEN creating one hell of a racket with songs such as Expector, Victim and Half Moon all having a rebellious anthemic quality about them. Lead vocalist Kat screams, snarls and sings her way through the 5 songs held on the EP, 24/7 DIVA HEAVEN deliver the right amount of aggression, authentic sound and originality in their music. SUPERSLIDE is bound to put the band on the right track to building a loyal and devoted following within the Punk and Hard Rock scene!

To celebrate the band’s debut EP, 24/7 DIVA HEAVEN will be playing their very first live show at the Zukunft am Ostkreuz in their hometown Berlin on the EP release day September 6th. SUPERSLIDE will be available as CD and Digital Download, for more info visit: