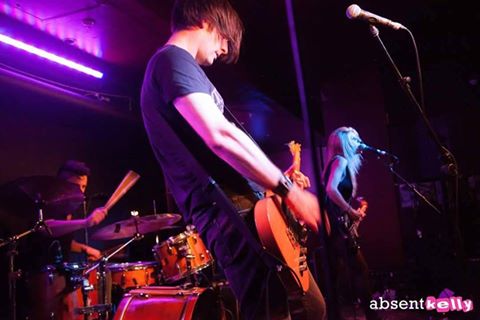 London grunge trio will unleash debut track
London alt rock three-piece By Starlight have announced the release of their debut single So Desperate for Friday 23rd September. The pounding new single is lifted from their upcoming debut EP and combines grunge riffs with ethereal pop hooks to mark the arrival of a uniquely talented new rock band.
Since forming just over a year ago, By Starlight have been busy perfecting their hybrid of muscular grunge-punk and dream pop and blowing away audiences on the buzzing London music scene. Led by charismatic singer-bassist & principal songwriter Sara Murray the band quickly developed a sonic formula influenced by 90’s alt rock greats like Sonic Youth, Smashing Pumpkins & Hole, and the trio’s wall of fuzz distortion is balanced by an ear for dark melodies that means their agile grunge arrives with infectious choruses that quickly lodge in the brain. To further confirm their growing rock credentials, The Cure and Placebo producer Paul Cockett was impressed enough to take the band under his wing to record their self-titled debut EP, set for release on 25th September.
The band are on Twitter @ByStarlightRock and Facebook at facebook.com/bystarlightmusic.