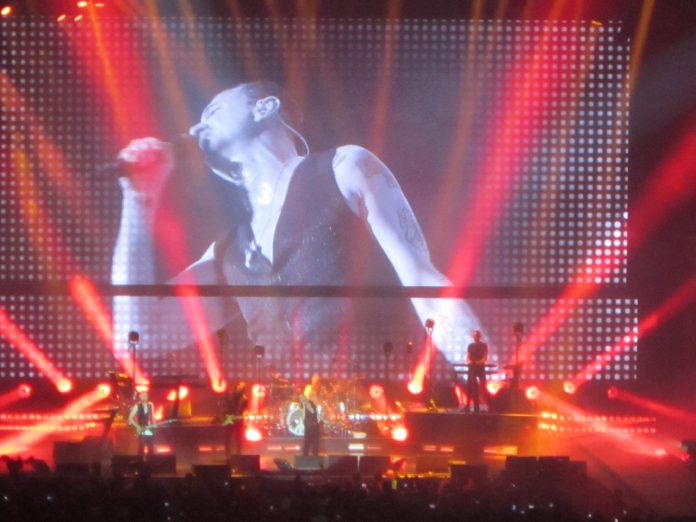 Tonight, we get to witness the Global Spirit Tour as it hits the UK`s second city. The tour started in Sweden in May and continues until next March, where it will conclude in Brazil.

The tour is in support of the band`s fourteenth studio album Spirit released in March 2017 and the follow up to 2013`s Delta Machine.

The Beatles song Revolution blasts out as the lights dim and the band take to the stage. The Anton Corbijn visual backdrop screens sparking to life and an instrumental version of `Cover Me` ringing out. the singe appears mid screen milking the attention of the auditorium like some dictator with a frenzied following while singing the churning “Going Backwards” from the new release before he shares a couple of older tracks with “It`s No Good” with it`s compulsive chorus of `Don’t say you want me, Don’t say you need me, Don’t say you love me, It`s Understood` and “Barrel of A Gun” ending with a snippet of Grandmaster Flash`s the Messenger.

The unnerving “A Pain That I`m Used To” trails along with the dark and brooding “Useless” and the hypnotic “Precious” and “World In My Eyes” before the wonderful “Cover Me” is shared against a Corbijn visual backdrop of Gahan looking alienated, dressed as an astronaut on the streets of Los Angeles and outer space. The singer plays an acoustic version of “Insight” before the reflective “Home” and moodier “In Your Room.” The political “Where`s The Revolution” is shared before it`s back to 1983 with the classic “Everything Counts” with Gahan and Gore trading vocals. Another couple of classics “Stripped” and “Enjoy The Silence” are gifted before the show concludes with “Never Let Me Down Again.” Well these Electro Rock pioneers had the frenzied audience eating out of their hands with the main protagonist Gahan spinning like a whirling dervish and strutting like a peacock down what can only be described as a catwalk. The faithful don`t have too long to wait for an encore, before the boys return with Gore taking vocals on an acoustic version of “Strangelove” before serving up the almost biblical “Walking In My Shoes”

It`s then back to the fast paced “A Question Of Time” with the singer again swaggering around with his arms wind milling and enticing the audience to sing along. The final song has to be none other than “Personal Jesus” and you can almost taste the adulation from the crowd.

This was a very enjoyable show which with the band`s well documented troubles and Gahan`s brushes with mortality that would have finished any lesser outfit, might never have happened.

The newer songs blend quite well and it`s heartening that a band with their reputation isn`t just sitting back and resting on their laurels. The new album is named `Spirit` and these guys certainly retain plenty of that.

Previous article
This Is Their Prophecy
Next article
Robert Plant @Civic Hall, Wolverhampton 20/11/2017