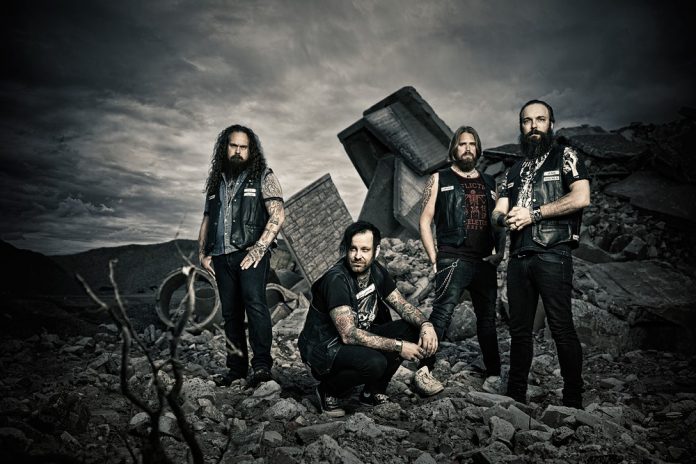 Swedish hard rock band Corroded; a band that topped the music charts in Sweden and whose songs are worshipped by fans around the world – is finally back, and this time the stakes are raised! After previously creating music for the Swedish TV show ‘Survivor’ (Expedition Robinson in Sweden) and the globally popular video game Battlefield, Corroded now enters ‘Defcon Zero’.

‘Defcon Zero’ isn’t just Corroded’s first new album in five years – it’s also their first release on Despotz Records. Signing to Despotz Records has opened brand new possibilities for Corroded and given them the firepower to further strengthen their position, both nationally and internationally.

‘The goal with this album is the usual – complete world domination!’ explains singer/guitarist Jens Westin explains with a smile.

The sound on ‘Defcon Zero’ is harder without losing any of the melodic focus. Five years might have flown by but ‘Defcon Zero’ picks up when the acclaimed ‘State of Disgrace’ left off; whilst sounding completely new at the same time! Above all – it sounds Corroded.

‘We worked solely within the band this time as we entered this process, with only some raw ideas without any preconceptions. From there on everybody contributed. The creative process was based on our live performances and we had tremendous fun while recording’ Jens comments.

Everything happened quickly after the release of Corroded’s debut album ‘Eleven Shades of Black’ back in 2009. The track ‘Time and Again’ was used in the Swedish version of Survivor (Expedition Robinson) and in 2010 the band won ‘Breakthrough of The Year’ at Bandit Rock Awards. When the next album, ‘Exit to Transfer’, hit the stores it went straight in at number six on the Swedish album chart. Corroded then wrote ‘Age of Rage’ for EA Games, a song that would be featured as the theme song for ‘Battlefield Play4Free’. ‘Age of Rage’ subsequently achieved Gold status, generating several million streams.

Five years may have passed since their last album but, during this period Corroded has kept on touring and their popularity has been constantly rising. Corroded pushed every limit and established themselves as one of the most prominent Swedish hard rock acts. Several of the new songs have become live favourites before they’ve even had a chance to be released, such is the dedication of the Corroded fan base!

‘We have more or less toured continuously and supported our previous album live for five years. In that sense we have been very lucky, but at the same time, we got the chance to play many of the new songs live and that proved to us they have an enormous strength’ says Jens Westin.

With the release of the new Corroded album, it’s time to reset the parameters and enter ‘Defcon Zero’!

‘Fall of a Nation’ available to buy here – http://phonofile.link/fall-of-a-nation