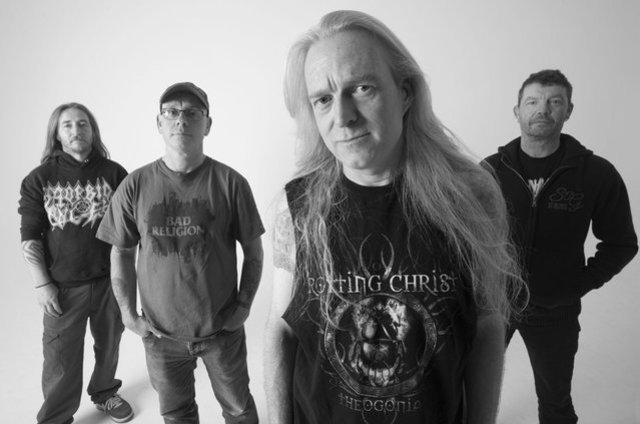 Old school death metallers MEMORIAM are set to unleash their debut album, For The Fallen, on March 24th, 2017 through Nuclear Blast Records. Today, the band have revealed the lyric video of the song ‘Surrounded By Death‘. Watch the clip, here:

Karl Willetts states:
“The lyrics to this song work on many levels. initially it relates to the literal interpretation of death all around on the battlefield.
The song was written when there was a lot of high profile celebrity deaths e.g. Lemmy Kilmister 28/12/2016, David Bowie 10/01/2017,  this was all over the media at the time when i was writing the lyrics to the song and had a major influence in the process. It seems that we all live in a world where we are all surrounded by death.
Death itself is a taboo subject that we never really think about or discuss until it actually happens to someone we know and love, in this respect the song is a reference to Martin Kiddie Kearns and also to Franks dad who died not long after Martin.
It is in some way a tribute their lives along with all the other people we have known and respected that have now passed on.”