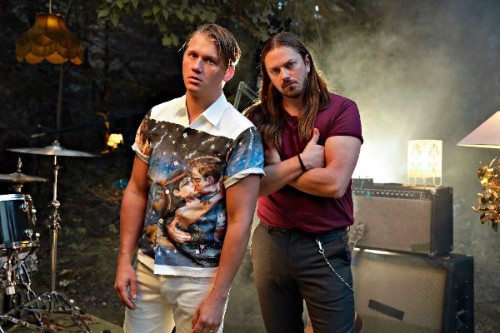 Johnossi have revealed the video for ‘Air Is Free’, the lead single and title track from the Swedish duo’s forthcoming EP due on November 8th through Polydor/Universal.

The powerful video, by contrast, features a nihilistic teen kicking up the traces in an austere cityscape interspersed with a dramatic performance from Johnossi themselves.  The video was directed by acclaimed Swedish production company Blacklite.

With the melodic power of Foo Fighters, the raw grit of Kings Of Leon and the expansive soundscapes of Imagine Dragons, Johnossi have become one of the biggest rock acts across Scandinavia, winning both a Grammy and two P3 Gold Awards (Radio 1 equivalent) in Sweden for ‘Best Group’.
At the end of August they performed an outdoor headline concert in Stockholm, with an explosive live show that dazzled over 10,000 delirious fans. They are also a major success in Germany where they will soon be headlining major concert venues in support of their forthcoming album.

Now breaking internationally, the Swedish phenomenon will be celebrating the release of their Air Is Free EP with a special launch show at London’s Hoxton Square Bar & Kitchen on November 8th, which will be followed by a large European tour in March 2017.

Get ready to fall for the passion and power of Johnossi – the biggest rock band you’ve never heard of. By next summer they could very well be your new favourite band!