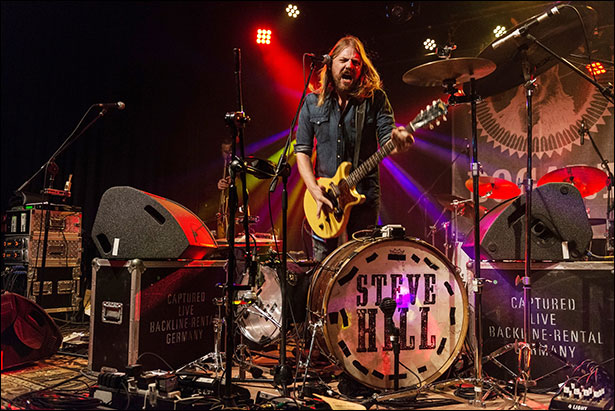 Steve Hill, the one-man band blues rock machine, will release his new album “Solo Recordings: Volume 3” on No Label Records in the UK on Friday 6th October 2017. To support the release, Steve will support Wishbone Ash on their 27-date October UK tour.

When it comes to one-man bands, guitarist and singer extraordinaire Steve Hill has no limits. Anything goes. He is the true exponent of a one-man band. Steve performs standing up while singing and playing guitar, his feet playing bass drum, snare drum, hi-hats and with a drum stick fused to the head of his trusty guitar, any other percussion within reach.

Steve’s an overnight sensation that’s 20 years in the making. He’s an ambitious and raucous force to be reckoned with on the Canadian and international blues-rock scene. Now, he’s ready to break out internationally.

Solo Recordings Volume 3 features originals that are outright rockers (Damned, Dangerous, Rhythm All Over, Smoking Hot Machine, Can’t Take It With You, Walkin’ Grave) to more acoustic-based melodic tracks (Slowly Slipping Away, Troubled Times, Emily) and three re-imagined and rearranged covers (Still A Fool & A Rollin Stone, Rollin & Tumblin / Stop Breaking Down, Going Down That Road Feeling Bad). The album shows an artist at the top of his game. It’s no surprise why the Montreal Gazette has referred to Steve Hill as “the meanest guitar player in Canada.”