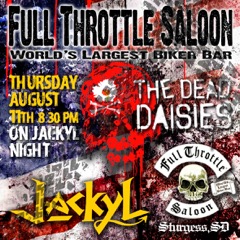 Special show tonight
Fast-rising rockers, The Dead Daisies will be taking a night off their US tour with the mighty KISS to perform at the legendary FULL THROTTLE SALOON (the world’s largest biker bar) and inhale the whole gasoline-laden glory of Sturgis 2016.
The Dead Daisies will be performing on “Jackyl Night” at Full Throttle Saloon, on Thursday, August 11th, 2016 at 8:30 pm.
John Corabi, vocalist for The Dead Daisies says: “It’s going to be a high octane maximum horsepower rock show! The Dead Daisies and Jackyl will kick out the tunes, kick up the dust, and put the ‘THROTTLE’ down, at the FULL THROTTLE SALOON for the Sturgis festival…classic rock, for a legendary festival!!!”
The Dead Daisies are currently in Europe promoting their forthcoming SPV/eOne release, ‘Make Some Noise’ which is being released August 5th, and produced by hit-maker Marti Frederiksen, who has previously worked with Aerosmith, Mötley Crüe and many others.
With sell out shows & jam packed Festivals, fans following the band across Europe and a surge in interest both from music media & rock fans alike, the new album comes into the world behind much lauded reviews from music press all over the planet.
Rock ‘n’ Roll is alive and well!!!
The Dead Daisies are John Corabi (vocals), Doug Aldrich (guitar), David Lowy (guitar), Marco Mendoza (bass), and Brian Tichy (drums).
More information at: www.thedeaddaisies.com