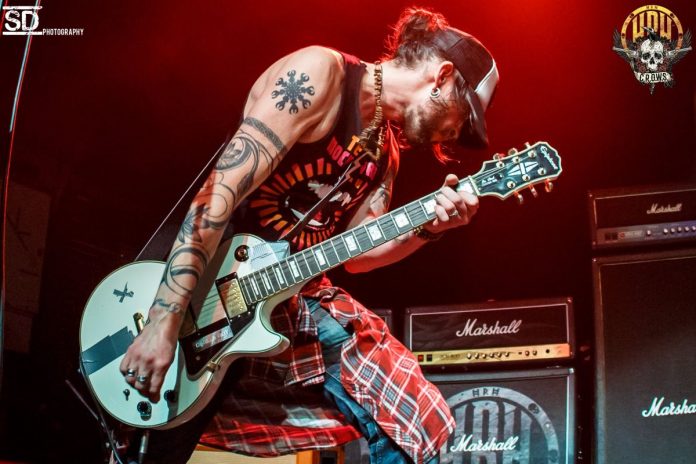 Hot off the back of a barnstorming set at HRH AOR, Manchester’s dirty southern rock n roll blues mavericks, Gorilla Riot release a new single, Half Cut, on Fri 29 March. It’s taken from their forthcoming album which is slated for release later this year, in Digital, CD and Vinyl formats on Off Yer Rocka Recordings (OYR).

In true maverick Gorilla Riot style, the song is an eclectic mix of free-flowing consciousness; no linear narrative, no chorus, and a huge chunk of guitar awesomeness.

Mainman, Arjun Bhishma, said, “At the time of writing I was heavily into Contraband by Velvet Revolver. I love that record and I think you can hear some influence from that style of ‘machine’ rock. Once I came up with the riff I still wanted to embed the song into some blues, so the verse riff is just a play on a simple riff with the gain cranked up. The solo came after I gave the song to the boys. It’s not usually the style of song that Charly would get to solo on but we chose to mix it up and he just ran with it, creating this behemoth of a guitar piece.

He added, “The song is a small window into experiences that I have had. It chronicles certain nights/days of revelry, highlighted with splashes of chemical colour. Without going into any specifics, the lyrics are simply supposed to provide a setting for the listener to interpret as they see fit.

“The recording process was the same as always for us. We get the drums and bass down at Futureworks studio with our engineer Carl Brown. The rest we do in our living rooms, surrounded by incense and cucumbers.”

Created by mainman, Arjun Bhishma, he surrounded himself with the best talent in Manchester to form Gorilla Riot.  Arjun, Liam Henry (guitars & vocals), Charly T. (guitars & vocals), James Degnen (bass), began songwriting and soon entered the studio to record their self-titled mini-album. This set them on their path to delivering their blues-drenched dirty sound that evolved into the acclaimed EP, Six Shots Down in 2017.

Equally at home acoustically or electrically they released their next studio work in May 2018. American Honey Vol 1 saw the guys extend their sound and song-writing prowess with 3 new songs plus an exquisite re-working of their hit song, Last Hymn.

Gorilla Riot recently announced that they have signed a 2-album deal with Off Yer Rocka Recordings, the first of which will be released later in 2019.