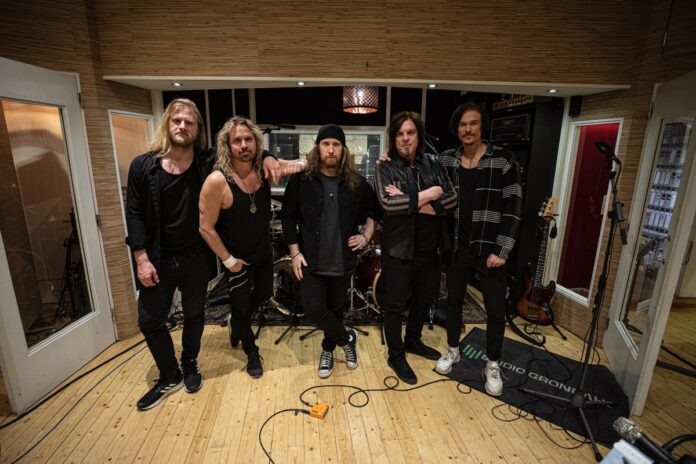 Swedish melodic hard rock supergroup Crowne will release a new live EP entitled ‘Live From Studio Gröndahl’ on 19th August, a little treat to hold fans over as they await the release of a second album by the band. A live performance ‘Kings In The North’ from the EP is available from today on all digital platforms.

The studio recording of ‘Kings In The North’ was the title track of their 2021 debut album, a record that truly delivered on the promise of the combined talents of the group members. Comprised of vocalist Alexander Strandell (Art Nation), guitarist/keyboardist/producer Jona Tee (H.E.A.T.), bassist John Levén (Europe) and drummer Christian Lundqvist (The Poodles), the record was a tour de force of Scandinavian melodic hard rock. It also featured guitar solos from Love Magnusson (Dynazty), who has now joined the line-up as permanent lead guitarist.

‘Live From Studio Gröndahl’ features the quintet tearing through five songs from ‘Kings In The North’ and allows fans to hear (and see) them playing live in an intimate setting.

Crowne is the most exciting, thrilling supergroup created to date from the Swedish melodic hard rock scene. Having already crafted a beast of a debut, this stellar cast of outstanding musicians are currently working diligently to better it with the recording of its follow-up.