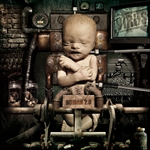 After their debut Mind Control (2011) Void Creation proudly presents their new album: DEADNOLOGY. Ten songs tell of the confusions of a perishing world,brutal guitar riffs and punching blasts are packed into an evil sound as their statement.

Void Creation was founded in Vienna in 2006 by ex-members of Diabolica and Saviour. The former Seeds of Sorrow shouter completes the active Line-up in 2008.

The final word belongs to the band: “Void Creation guarantees for neck pain!” they say. That’s sorted then!