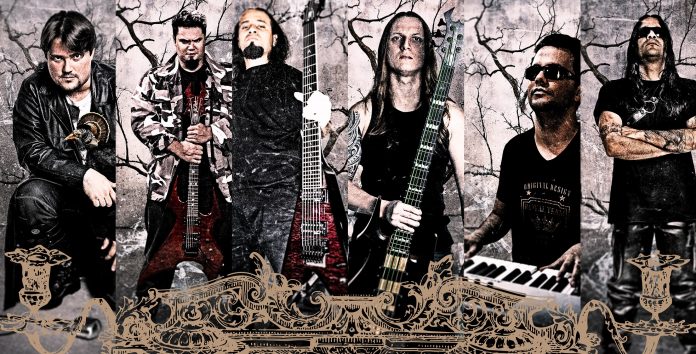 Have these Brazilians developed a new style? They think think so

Tellus Terror was founded in November 17, 2012 by Felipe Borges and Alvaro Faria, in order to make an aggressive sound but with a wide mix of genres of Metal and Rock, in Niterói, Rio de Janeiro – Brazil.

The band tell us the first challenge was to define the band’s style, to better reflect all ideas to the band, and that is why the style M.M.S. (Mixed Metal Styles) was created by Tellus Terror, to fease the will to mix in it´s compositions Death Metal, Black Metal, Thrash Metal, Doom Metal, Gothic Metal, Heavy Metal, Power Metal, Splatter, Grindcore, Hard Rock etc and more

The six piece band, Felipe Borges – All Vocals, Wederson Felix – Lead And Rhythm Guitars,Alvaro Faria – Lead And Rhythm Guitars,Arthur Chebec – Bass! Ramon Montenegro – Keyboards And Synthesizers
Rafael Lobato – Drums And Percussion, decided not to start its career with an EP or single, and preferred to be focused for a year to create 10 songs, with enough time and material to record a full length album.

With the initial idea created, Felipe Borges began writing all the lyrics of the album, and create the concept of the first album, titled EZ Life DV8 (Easy Life Deviate), which is based on a theory about how life began, through the formation of planets, of life, about how we are able to destroy it, the way we live and evolve throughout the years, how would the endtime panorama would look like, showing how people wonders how life could end, and what could be done for the continuation of our species, and finally, showing that everything we can imagine is a mistake, and that death is the only certain matter we do now so far.

Have they achieved their aim? Check em out here and see for yourselves.