Crawling Down A Dead End! 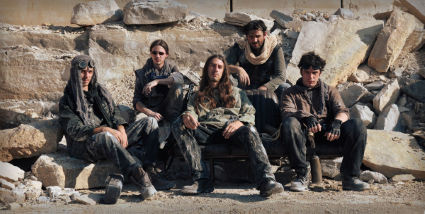 For fans of Kyuss, AIC and Truckfighters they say. We listen!

Soundcrawler initially formed in 2011 as a two-piece project by vocalist Rémi Pocquet and guitarist Clément Revieriego. Influenced by the likes of Kyuss, Mastodon and Karma To Burn, the duo soon started working on their first studio effort, “The Sandcrawler” EP, which was released one year later, in July 2012.
In 2013, Soundcrawler expanded into a quintet with the addition of Robin Cauchois on drums, Firouze Pirolley on bass and Paul Parsat on guitar and were able to test their riff-centric heavy-rock before a live audience for the first time.

2015 will finally see the release of their first full-length album “The Dead-End Host”, a powerful collection of nine new songs filled with infectious riffs, groovy rhythms and dark, bluesy melodies that will surely impress fans of Queens Of The Stone Age, Soundgarden, Alice In Chains and Truckfighters.