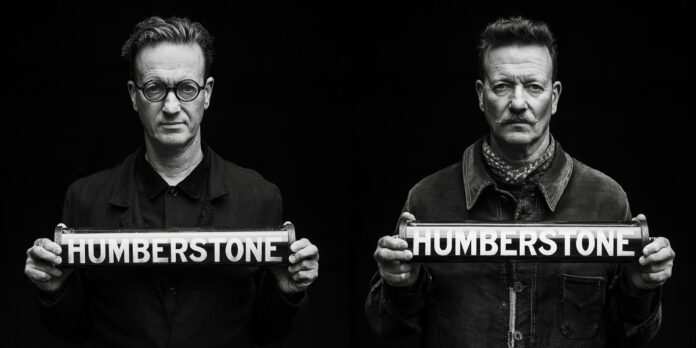 Sheffield-based In The Nursery have today issued a video for ‘Cookham Stone (The Painter)’, an elegiac yet resplendent track included on their recently released album, ‘HUMBERSTONE’. The first studio record since 2017 by the group, its title is also the surname of ITN core duo Klive and Nigel (who are identical twins).

They explain that the new clip “is largely inspired by our childhood memories of Cookham, Berkshire and the surrounding area. The title references the Tarry Stone, an ancient boundary marker, but also alludes to family member Hilda Ireland, the notable 20th century painter. With such a treasure trove of archive home movies in our possession, we couldn’t miss the opportunity to put together a personal but evocative video for the track. Snippets of bygone local life and fleeting flashbacks create a deep yearning to return to a former time, another place.”

Having initially been released on CD digibook and digital formats, a limited 2×10″ gatefold vinyl format of ‘HUMBERSTONE’ is also available now.

Recorded in 2021, a year in which the twins turned sixty, ‘HUMBERSTONE’ sees them in reflective mood. “As composers, we are conscious of the connection between music and memory. The loss of family is a strong emotion, one that we’ve harnessed to re-visit our past. Our antecedents have been a catalyst and a stimulus for this album – it has been good to re-connect and remember.”

The album includes two previously released singles – ‘Ektachrome (The Animator)’, which is titled after their late father, and ‘Émigré (The Dressmaker)’, which depicts a real-life tragedy that involved late 19th Century ancestors of the Humberstone family.

Recorded at their own Beehive Works studio in Sheffield, each track on ‘HUMBERSTONE’ is prefixed with an ‘H’ number to indicate the order of ideas that came to the twins when writing it.