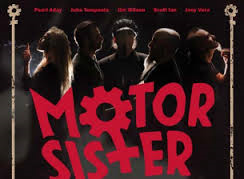 That’s right folks, next week will be the official Motor Sister week on Maximum Volume as everyday there will be post about the band.

The album is called “Ride” and Donnie will have his review on the website along with a brilliant two-part interview with the maniman Jim Wilson.