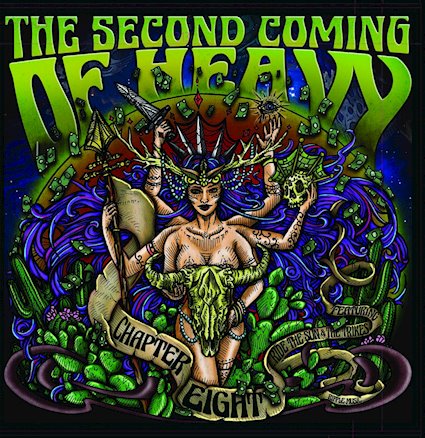 Already recognised as one of the world’s leading purveyors of Rock ‘n’ Roll, Stoner, Doom and Heavy Psych, Ripple Music upped the ante in 2015 with the arrival of one of their most ambitious projects to date, The Second Coming of Heavy Series.

Serving as an ongoing showcase for some of the best and heaviest bands emerging from the underground, each instalment shines a light on those worthy of your attention. Consisting of one, 12” slab of multi-coloured vinyl with full colour sleeves and inserts, the series is designed to be saved and treasured, like a fine anthology of books. So much so when the albums are filed next to each other, the complete collection of aligned spines form a mind-blowing image direct from the underground.

Bands that have already featured in the series include Geezer, Borracho, Supervoid, Red Desert, Kingnomad, Bonehawk, Red Mesa, Blue Sanggletooth, Fuzz Evil, Switchblade Jesus plus a whole host of others. For this latest instalment it’s the turn of Southern Californian stoner rockers Ride The Sun and heavy Dresden-based bombers, The Trikes.

The Second Coming Of Heavy; Chapter VIII will get an official vinyl release on 4th May 2018 and is limited to 300 copies in three alternative versions (100 of each) – The Resurrection Edition, The Risen OBI and The Ascension Edition.