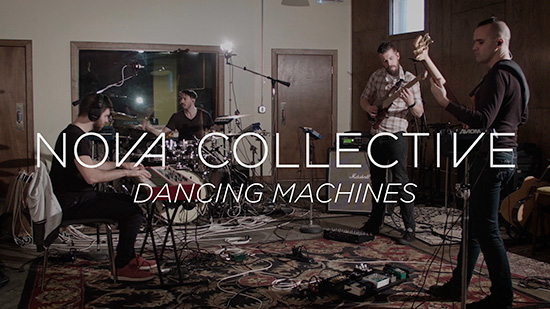 On March 10th, NOVA COLLECTIVE (featuring members of Between the Buried and Me, Haken,Trioscapes, Cynic) will release their debut album, ‘The Further Side‘, via Metal Blade Records.NOVA COLLECTIVE‘s music can be described as fusion, weaving progressive rock influences with world music, jazz and classical, to create something entirely new that is pure aural candy for prog/jazz fans. For a preview of ‘The Further Side‘, a full-band, live performance video for the first single, ‘Dancing Machines’, can be viewed at: youtube.com

Then surf over to metalblade.com/novacollective – where the album can also be pre-ordered in the following formats:
–CD
–Black 180g LP
–Clear-red marble LP (limited to 200 copies!)
*digital options are also available!

NOVA COLLECTIVE began in 2014 when bassist Dan Briggs (Between the Buried and Me,Trioscapes) and guitarist Richard Henshall (Haken) began exchanging emails about music; before long, a few demos were fleshed out into full arrangements. Drummer Matt Lynch (Trioscapes,Cynic) and keyboardist Pete Jones (ex-Haken) came on board shortly after to finish writing the album. ‘The Further Side‘ was written on both sides of the Atlantic Ocean, with Briggs and Lynch in America and Henshall and Jones in England, sharing session files until the group could get together at the beginning of 2015 to record with engineer Jamie King (Between the Buried and Me, The Contortionist). Mixed by Rich Mouser (Neal Morse, Transatlantic), it is immediately clear thatThe Further Side is a labor of love for all involved, and that enthusiasm shines throughout.