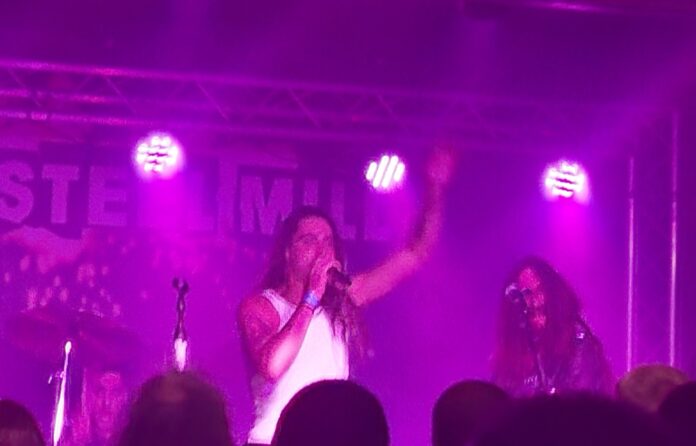 Henrik Steenholdt probably nails it, to be fair. “You know,” the Empyre frontman deadpans to the crowd. “We are not a party band.” Their website mentions their “dark, atmospheric” sound too.  They are a little too modest to say the rest of it, so I will: Empyre are also absolutely sensational. They’ve made the journey from Northampton to be amongst friends here, and no mistake. There’s a lot of Empyre shirts amongst the sizeable, sweaty crowd. There’ll probably be a few more next time. Confident enough to augment their set with new material, it basically carries on with what “Self Aware” – their 2019 debut – did and might have made it better. New one “Relentless”, the superb “Homegrown” and “Stone” (two that were on the album) are not your normal Friday Night hard rockers. Indeed, they come in with a gravitas. Not the usual word you put in a live rock review, but there’s none better to describe the depth of what they do. Did Coles on guitar adds from massive, thick riffs, yet there’s a lighter, acoustic side too which a superb “Only Way Out” shines a glorious light on. With only half an hour to impress here, Empyre do it in their own way. They do, though, save their most immediate moment for the end and “New Republic” shows they’ve always had something special. Of all the “new breed of British Rock” I’d contend, though, that no one blurs the lines, or makes more interesting music than Empyre.

There’s wearing your influences on your sleeve – and then there’s Collateral.

As they enter the stage here Bon Jovi’s “Let It Rock” blasts at some ear-splitting volume. The first song on the first album that ever saw music become “mine” and not my parents. It’s no exaggeration to say that if “Slippery When Wet” hadn’t come out in 1986 then my life would probably have been very different.

That’s my story. What happens in the next hour is Collateral’s.

Beginning with “Mr Big Shot” – a song from their debut record –  what they do is basically play Arena Rock on the small stage.  The thing is though (and this is meant as a compliment) to Angelo Tristan, Jack Bentley Smith, Todd Winger and the others, it doesn’t matter. Every gig is Wembley Stadium.

How else do you explain “Lullaby”, with more “whoa, whoa” chanting than Freddie Mercury, or “Promiseland” which is so set in the 1980s that it might as well be wearing shoulder pads and watching Cagney And Lacey at your nans house.

Yet, the fact that the band and the crowd all understand this makes this perfect. It helps that Tristan is a born frontman if ever there was one and when he says to the crowd “thanks for understanding what good music is these days”, he’s hit the nail on the head. This is a band playing the music they love, for people that love it too.

They do it superbly. “About This Boy” (“this is the country one, the band hate me for loving country” smiles the singer) and their first single “Midnight Queen” are as good as any retro looking hard rock has been in a long time.

There’s a couple of new tunes too. “Sin In The City” is probably what they dreamed of doing since they were kids, and “In It For Love” isn’t the type of power ballad the title suggests it’d be. And the closing “Merry Go Round” is as fun as the rest of it. Oddly, there’s no encore. You would in truth imagine that this was very much the type of band who’d almost demand one of themselves.

The last time I saw Collateral they were opening for Phil X And The Drills (they’ll be with them again on the big stage next door when Skid Row and Winger tour in the autumn) and on the review that night I wrote: “Angelo has never yet seen a stage he didn’t want to be on”. That’s still true. The date of that gig though? 12th March 2020. About a week before we all stayed at home for 18 months. There’s something of a joy in the normality of the fact we are back here watching superb bands play sweaty gigs on a Friday night. In different ways, both bands here understand that just as much.