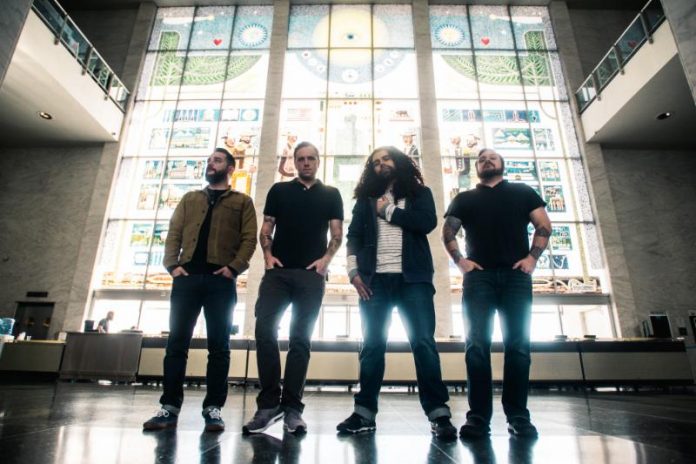 Roadrunner Records group Coheed and Cambria have shared a brand-new track titled “The Dark Sentencer.” The song, which will appear on Coheed and Cambria’s forthcoming LP expected to arrive later this year, is the first new music to be released by the band since their acclaimed 2015 LP, The Color Before The Sun.

“The Dark Sentencer,” a 10-minute prog manifesto, first appeared this morning on frontman Claudio Sanchez’s socials along with the opening paragraphs from his new concept story which will accompany the upcoming record. It reads:

Years ago, chaos cut through this atmosphere. The fractured worlds that inhabit this space were once locked in a force of uncontrollable destruction. Gravity was lost. Their planetary trajectories conjoined in one catastrophic collision, choking to remain viable even as the dying glow of their cores peek through the cracks and scars of those impactful moments. Yet a gasp is a sign of life and the planets that many might have cast off as annihilated space continued to show a pulse across the hopelessness. This discarded earth is still very much alive…and made profitable by the 5 Houses of the Star Supremacy, an elite society who looked to the sky and saw potential in the wasted planets. The opportunistic approach could hardly be considered an act of empathy for the human condition, as the decision to convert the dying planets into private prisons meant another type of life sentence awaited those shipped off to their remote reaches. Here, the desolate and derelict would burn away slowly, trapped in a race to death with the very ground they stand on. In this space, between the Well and unknowing.

Our Story Starts there. Into our future, yet far beyond our past. In a romance between a pair of Unheavenly Creatures.

Weaving through the blacked out space toward the freckling of cracked planets, The Gavel moved like a funeral procession. In many ways, it was the end of life for the two prisoners being transported within its unmitigable walls, to the most deplorable and prized of the doomed prisons, known simply as The Dark Sentencer.

Having announced their signing to Roadrunner Records earlier this year in a shadowy video clip, Coheed and Cambria have been finishing up work on their forthcoming label debut. Comprised of Claudio Sanchez (Vocals / Guitar), Travis Stever (Guitar), Josh Eppard (Drums) and Zach Cooper (Bass), Coheed and Cambria has gripped listeners and press around the globe with their visionary compositions and conceptual mastery.

This weekend, Coheed and Cambria will be one of several guest performers (including will.i.am, Grace Potter, Nick Sagan and more) to celebrate the 60th anniversary of NASA by joining the National Symphony Orchestra at The Kennedy Center in Washington, D.C. NSO Pops: Space, The Next Frontier is set to take place June 1st and 2nd and will feature music inspired by space—both fact and fiction—ranging from the theme to 2001: A Space Odyssey—Strauss’s Also Sprach Zarathustra—to music from Carl Sagan’s Golden Record and more. For tickets and more information, visit: www.kennedy-center.org/calendar/event/NSPSF.

This July, Coheed and Cambria will set out on a U.S. co-headline mostly-outdoor tour with Taking Back Sunday and special guests The Story So Far. Tickets for all dates are on sale now. For tickets and more information please visit www.CoheedandCambria.com.