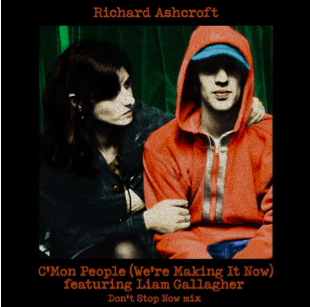 Richard Ashcroft’s ‘Acoustic Hymns Vol. 1’ breathed fresh life into one of British music’s most remarkable songbooks. Greeted by strong critical acclaim, the album debuted at #2 on the Official Albums Chart which is his joint highest position in fifteen years. The songs again took on a new life during his first ever acoustic tour, which saw him pack London shows at The Royal Albert Hall and the Palladium (two nights) as well as Liverpool’s M&S Bank Arena.

Richard’s duet with Liam Gallagher on the album’s acoustic version of ‘C’Mon People (We’re Making It Now)’ captured the imagination of fans. The song is currently Record of the Week and on the Daytime playlist at Radio X, A-listed at Radio 2, and playlisted at Absolute Radio.

Inspired by the reaction, Richard returned to the studio to deliver the new Don’t Stop Now mix of ‘C’Mon People (We’re Making It Now)’, which is out today.

This new Don’t Stop Now mix of ‘C’Mon People (We’re Making It Now)’ sees the song reach its full potential. Now supported by an exuberant, full band wall-of-sound, Richard Ashcroft and Liam Gallagher deliver their performances in a typically iconic and charismatic style, clearly relishing the opportunity to collaborate on a song that they both cite as a personal favourite.

‘C’mon People (We’re Making It Now)’ originally featured on Richard’s debut solo album ‘Alone With Everybody’, which went straight to #1 in 2000.

“People need to appreciate the soul in Liam’s voice,” said Richard in an interview with the Irish Examiner. “For me, I could appreciate my song again, like any creative person, we are always on to the next thing and we all have insecurities but that was so fantastic to hear. It’s this brilliant, natural thing and he knows that. There are special reasons and musical reasons that it sounds the way it does, he brought his musicality and added something so it works on multiple levels.”

Liam added “I first heard ‘C’mon People’ when I kidnapped Richard and Kate for the weekend in Formentera, 20 odd years ago, I don’t think he’d even finished writing it. I’ve loved it ever since and play it round the house on many a drunk occasion. It’s an honour and a privilege to sing it. LG x”

The release of ‘Acoustic Hymns Vol. 1’ was previewed by the release of the classic  ‘Bittersweet Symphony’ and the rediscovered fan favourite ‘This Thing Called Life’, the latter of which was nominated as Radio X’s Record of the Year 2021. ‘Bittersweet Symphony’proved to be particularly poignant, having taken on a new power following the news that Mick Jagger and Keith Richards had decided to return the song writing credit to Richard. ‘This Thing Called Life’ then received a worldwide exclusive play on The Zoe Ball Breakfast Show, while far-reaching tastemaker coverage has included NME, Clash and Brooklyn Vegan.

Richard Ashcroft’s touring plans for 2022 are taking shape. He is confirmed to headline the Highest Point Festival in Lancaster on May 12th and  Nottingham’s Splendour Festival on July 23rd. He will also play CarFest North in Cheshire on the weekend of July 22nd-24th.

Richard Ashcroft is a two-time Ivor Novello winner (Songwriter of the Year in 1998 and Outstanding Contribution to British Music in 2019) who has released five Top 5 solo albums, including the #1 debut ‘Alone With Everybody’. He first came to attention with The Verve, with who he released one of the biggest albums of the era in the shape of ‘Urban Hymns’ as well as a succession of anthems which remain staples of his live set today, including ‘The Drugs Don’t Work’, ‘Bittersweet Symphony’, ‘Lucky Man’ and ‘Sonnet’.