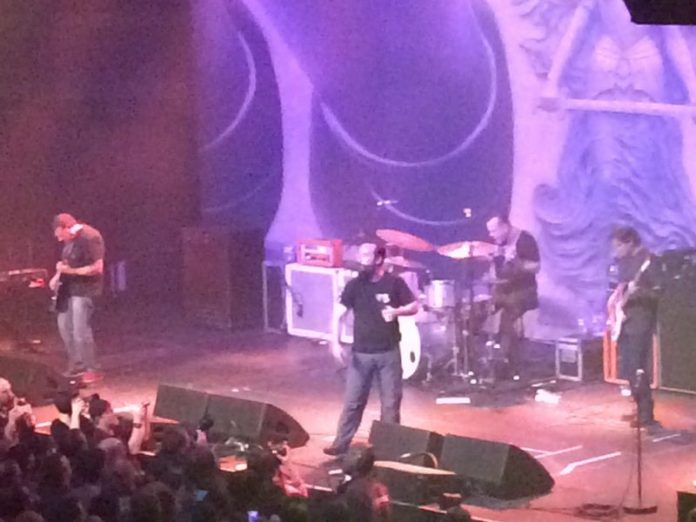 Maryland’s finest check into the Motel,  consult the horoscope and casually turn in one of the gigs of the year

Frequent visitors to these shores these days, Maryland’s Lionize are back here for, as singer Nate puts it, “one more go round with ya’ll this year”. There are some familiar things about this set. Like the fact the songs are excellent, rocking, rolling and drenched in Hammond Organ as only Lionize can manage, and like singer Nate Bergmann is in his multi-coloured onesie again. But elsewhere this is a very different Lionize. A half hour made up of songs that are from a yet unreleased record is brave, or at least would be if it wasn’t superb. There’s some stuff that sounds like Lionize, but there’s some that hints at a fresh new sheen. There’s a big old power ballad, a funky little strutter and there’s one – for which Clutch’s Tim Sult joins them – with twin guitar harmonies that Thin Lizzy would be proud of. Lionize then: gearing up for a huge 2017.

Valient Thorr aren’t here to test new stuff. They haven’t come all the way from Venus for anything else than a P.A.R.T.Y. Valient Himself is a jack in a box of a frontman and his performance is like a tour de force of rock n roll. He dedicates “Mirakuru” to Popeye for reasons that remain unclear (something to do with nutrients) “Cut And Run” to those who want to get out during the holidays and “Jealous Gods” to Lemmy and all the while the drums pound and the guitars slash like an unreconstructed version of early Hellacopters at their most scuzzed up and punky. There’s simply nothing to do but get swept up in it and pulled along by it all. Standout cut “Looking Glass” is a call and response boot to the balls of simplicity and rock n roll may as well be boiled down to breakneck riffs and impassioned performances. That’s what Vallient Thorr provide, by the spacecraft propelled barrow full.

How do you adequately describe a Clutch gig to those that don’t know? Well, imagine this. Four blokes that look like, well, you and me basically shuffle on at 9.30. Their bearded leader surveys the close on 2000 sell-out crowd, smiles and says:”well, look at all of you…..this is going to be fun!” the band plugs in, plays – appropriately enough, the first song is “The Mob Goes Wild” – and all hell for the next 90 minutes has broken loose.

Clutch know they aren’t rock stars in the conventional sense, so they are just Clutch, and that’s why people love them. That and the fact they’ve got songs like “Firebirds” and “Quick Death In Texas” which rule more than songs have a right to.

Those are from last years wonderful “Psychic Warfare” record, but the joy of Clutch is you never quite know what you’ll get. In November 2015 – when last MV worshipped at this particular alter – they played all of the record, tonight they don’t. tomorrow they might. Instead we get songs like “The Regulator” an “Escape From The Prison Planet” that they don’t often play, and they take the opportunity to knock out “10001110101” because they can use Lionize keyboard man Chris Brooks.

“Cypress Grove” allows them a little jam, but its not the night for that, and “Noble Savage” is a standout, but after they’ve ended with “The Wolfman Kindly Requests” they more or less saunter back on for an encore that takes things to another level. “Electric Worry” is the breakthrough hit and is lapped up, while “X-Ray Visions” is not just probably the only song in history to namecheck the “angry spirits of Ronald and Nancy Reagan” but it is the best thing here tonight, the best song of 2015 and very possibly the best song of the last five years.

Clutch have calmly gone from being a cult name to drop to an absolute knockout mainstream act, not far away from headlining the absolutely huge places that rock bands aren’t supposed to get, and they’ve done it, well, essentially by being too good to ignore. Like they were here.