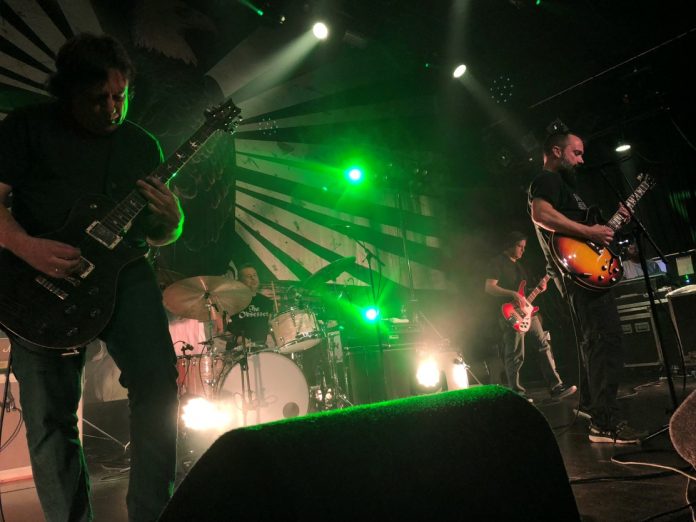 Clutch are the best Band in the world right now. There I’ve said it – yes I know it’s only my opinion but it seems to me that their slow burning star has become a fiery comet in the past few years. It seems more and more people agree and as a result the venues are getting bigger but remaining full. The critical acclaim also shows no sign of slowing up. It’s to their credit that they have managed to achieve all of this on their own terms and have maintained their credibility and self-respect in an industry where it’s easy to lose both.

This tour is in support of the recently released ‘Book Of Bad Decisions’ and this album is going to push them on even further. It’s one of their best albums and who knows, over time I may think of it as their very best. It’s a brilliant collection of songs that maintains all the heaviness and groove they have always shown but added a funkiness and swing to the music that they have always threatened but always held in check. As a result I think it’s their most commercial and accessible album and it was no surprise to hear them played on Planet Rock as we drove home from the airport today.

So from all of this you may have realised we like them a lot (understatement of the year). My wife and I therefore decided to catch an extra show this tour and headed off the Amsterdam for the opening night. The Melkweg is a great venue in central Amsterdam which was close to its 1500 capacity when the guys from Maryland strolled on stage at 9pm to the usual Chuck Brown soundtrack ‘We Need Some Money’.

Clutch never stick to the same set and it’s almost irrelevant to list every song played last night. Anyone attending this tour can be certain to hear a good number of songs from the latest album along with a hand-picked selection from their entire back catalogue (referred to last night by frontman Neil Fallon as their Top 10 hits). We actually got six songs from the new album including the singles ‘How To Shake Hands’, ‘Hot Bottom Feeder’ and ‘In Walks Barberella’ along with one of my personal favourites ‘Ghoul Wrangler’, which in itself was immense. The sound quality was excellent throughout and standing stage left we got the full effect of guitarist Tim Sult’s onslaught of riffs, which from the opening ‘Vision Quest’ to the double-whammy encore of ‘Electric Worry’ and ‘X-Ray Visions’ was relentless. Bassist Dan Maines went about his job in his usual low-key way but his work with drummer Jean-Paul Gaster (hard rock’s answer to Charlie Watts in my opinion) makes them as good a rhythm section as you’ll find in any rock band past or present. Vocalist (and sometimes guitarist) Neil Fallon remains the Band’s focal point and he was on great form tonight, his theatrical delivery making him one of the best there is.

In total Clutch played a seventeen song set, so eleven old songs to go with the six new and of the old numbers, ‘Cypress Grove’ deserves a special mention for just how great it was – the guitar work was incendiary and the guys seemed to really enjoy playing it.

They are off around Europe before arriving in the UK for five dates starting in Bristol on the 18th December. That show is already a sell-out and there are not many tickets left for the other dates. Miss these shows at your peril and if you don’t have tickets then you know what you have to do. So what are you waiting for, Christmas?