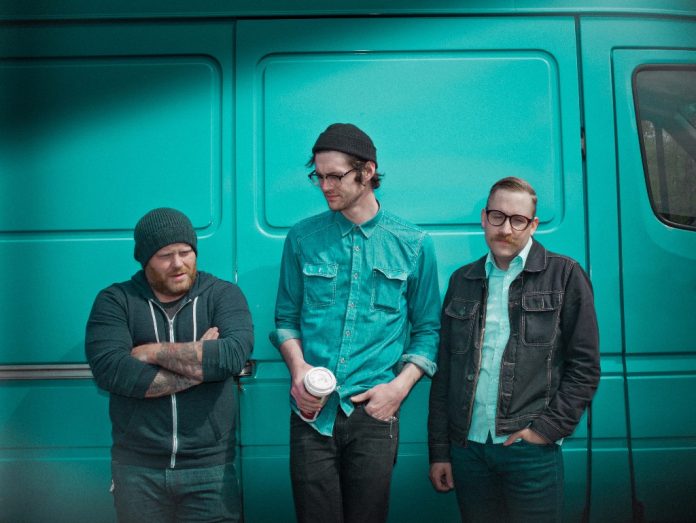 Northwest Indiana’s Cloakroom have announced that their second album Time Well is set for an August 18 release on CD/2xLP/Digital formats, marking the band’s debut for the esteemed Relapse Records.

Noisey commented on the new song: “It’s heavy, atmospheric, and distinctly American guitar music that can be as pretty as it is pulverizing.”

Grandiose and deeply insular, Time Well is a work that transcends simple genre descriptors as the trio prove dually capable of conjuring lumbering walls of sound as well as forlorn Americana (as predicted by a recent Songs: Ohia cover the band posted to Bandcamp). Cloakroom occupies a space between worlds, crafting its unique brand of thoughtfully heavy music, something Relapse has long specialized in.

For the new album, the trio (consisting of vocalist-guitarist Doyle Martin, bassist Robert Markos, and drummer Brian Busch) opted to explore their shared creative space by building their own studio, transforming their practice space into a sonic laboratory in which they could immerse themselves in every aspect of the creative process. Once the studio had completed its transition it became a workspace that was essential to the creation of Time Well, sheltering the band from the outside world as they immersed themselves in the songs and pushed sounds to their furthest limits.

“We could work at all hours of the night and pick up where we left off days later,” said Doyle Martin. “We vaulted the ceiling, amassed some gear with a little help from Relapse, and, after laying a rat’s nest of cables through the place, we started to record.”

Cloakroom first materialized back in 2012 with a couple songs that appeared on a Bandcamp page with the succinct description: “Cloakroom consists of three factory workers from the Region.” As far as biographies go it’s about as terse as they come, but it conveys simple facts that speak to greater truths. Cloakroom is still a trio and still resides in the Region, a unique amalgam of cities and towns in Northwest Indiana that’s equal parts industrial and rural, a sense of space that leaves a distinctive sonic imprint across all the band’s recorded works. With Time Well, Cloakroom shows itself untethered from the present moment. It’s a record that’s flanked by contradictory ideas that are always running parallel; growth begets destruction begets death. It’s an unending cycle, and Time Well is the soundtrack to that unending, awe-inspiring momentum.