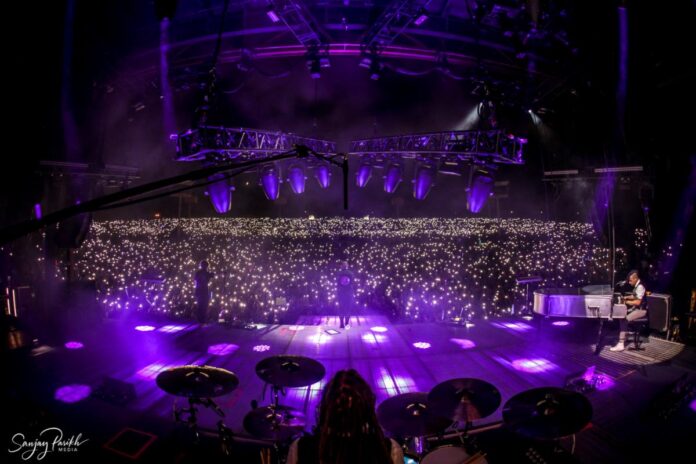 Multi-platinum, chart-topping band Shinedown have released an emotional tour video for their current hit single “Daylight,” off their latest album Planet Zero. The new visual, created by Sanjay Parikh Media, is dedicated to all the fans worldwide and documents the band’s Planet Zero World Tour, which wrapped its U.S. leg earlier this month with an explosive set at the Aftershock Festival after crisscrossing the country with Jelly Roll and John Harvie in tow. PRESS HERE to watch the powerful video, set to the Amazon Original version of “Daylight.“

“We wanted to show the power of the human condition,” shares front man Brent Smith. “As a band, we wanted to express our appreciation and our love of bringing people together. We have said it before, and we will say it again, we only have one boss. It just happens to be everyone in the audience. This is our love letter to the greatest fans in the world.”

“Daylight“is a meaningful portrait of a vital human connection that reminds us that we are never alone and reflects on the importance of empathy and the relationships in our lives that help get us through to the next day. The poignant anthem, hailed by People magazine as “the most powerful of pop-rock songs created to remind us that we are truly all in this together,” marks Shinedown’s 19th #1 at Active Rock and 18th #1 on the Billboard Mainstream Rock Airplay Chart – both all-time records on these charts. “Daylight” has also been streamed over 15 million times collectively across DSPs. The Amazon Original version, first released in September, is a complete re-imagining of the song that changes up the chord progression and tempo, and injects big drums and an aggressive distorted synth guitar tone that balances against the beauty and softness of the verses and chorus.

Shinedown’s acclaimed seventh studio album Planet Zero, produced by the band’s bassist Eric Bass,is out nowvia Atlantic Records. PRESS HEREto listen. Planet Zero debuted in the Top 5 on the Billboard 200 Chart and the Official UK Albums Chart, and at #1 on six other Billboard charts including Top Album Sales, Rock, Hard Rock, and Alternative Albums Charts. Led by tracks like “Daylight” and title track “Planet Zero,“the album’s searing social commentary boldly confronts the societal forces that perpetuate divisiveness while offering a restorative path forward through empathy and open conversation – ultimately serving as a reminder that it is our human connections that matter the most.