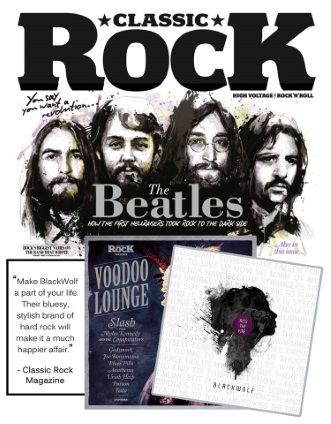 The band have their new single “Kiss The Fire” featured in Classic Rock Magazine, just months after magnificent debut record “The Hunt” was unleashed.

As singer Scott Sharp explained, that was always the plan: “We wrote ‘Kiss The Fire’ with the idea that it would be a bridge from what we did on our debut album and what we’re looking to do on our next album,”excited Scott. “It’s a chance to explore certain ideas and to refine our trajectory when it comes to our song writing. ‘Kiss The Fire’ is a great snap shot of where we are as a band right now, and where we’re looking to go after everything our first album has given us.

The frontman went onto to talk about “…Fire’s” lyrical content: The song’s about accepting the impossible challenges you face in life and learning to find peace in the way they test you. There’s always growth to be found in struggle, and strength as well. There’s a definite tug and pull to this idea and we wanted to explore that both musically and lyrically.”

The track – which is strictly a stand-alone single and will not feature on the new album – was produced by the band and Jeff Rose in South Wales.

Blackwolf are on a Classic Rock sponsored tour this month, taking in the following shows.

To find out what we thought of Blackwolf back in March click here.