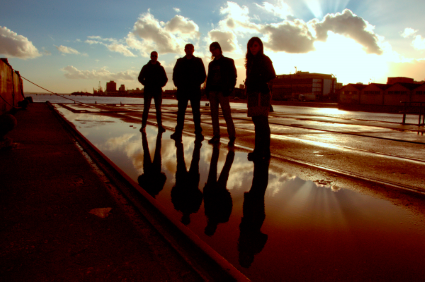 Portuguese Alt Metallers release the first in a trio of EPs

“DHIST” was released on November 28th via Ranging Planet Records and is the first of a collection of three eps the band is planning to release in the coming months.

The record was mixed and mastered by renowned producer Waldemar Sorychta (Lacuna Coil, The Gathering, Moonspell, Tiamat, Samael) and featured Pedro Cardoso from Fever on drums and Ricardo Amorim from Moonspell on guitar. Moonspell vocalist Fernando Ribeiro also contributed with lyrics for two songs, “AIR” and “The Night of Everyday”.

In 2009, guitarists Tiago Menaia, Fred Gonçalves and drummer Sergio Lopo join the band and in 2012 this expanded line-up records and releases their third album “Wild Grown”. Mixed and mastered by Saosin’s guitarist and engineer Beau Burchell, who has worked with acts like The Bronx and Underoath in the past, “Wild Grown” was distributed worldwide by Sony Music Entertainment.

2014 marks the return of the band to recordings, now as a four-piece following the departure of guitarist Tiago Menaia in 2012. Entitled “DHIST”, this new work is first of a series of three eps the band is planning to release in the coming months.