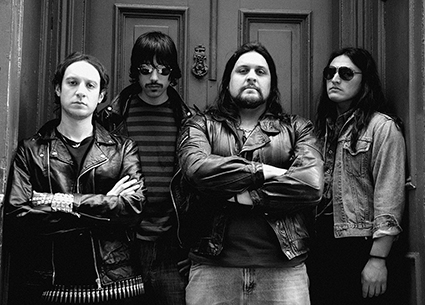 Since transforming from a one man band in 2009 to a full line up ACERO LETAL have stormed the underground with finely honed Speed Metal, even garnering a Band Of The Week mention from Fenriz in November of 2014!

ACERO LETAL are currently working on their debut full length, WITCHES BREW will be releasing the album and a 2015 release is expected at this time.

The “ACERO LETAL” 7″ EP is available now on the WITCHES BREW website: www.witchesbrewthrashes.eu
and also on the labels Bandcamp page:http://witchesbrewthrashes.bandcamp.com
ACERO LETAL, whose name translates to “Lethal Steel”, was formed in Valparaíso, Chile in 2007 by vocalist/guitarist JAG. A year later, as a one man band, the Por la gloria del Metal (For the Glory of Metal) 1 track single, limited to 66 copies, was released. In 2009, with a full line up, a 2 track cassette, limited to 666 copies, also titled Por la gloria del Metal was released. That 2 track cassette will also get a vinyl 7″ release by Destruktion Records/Anger Of Metal later in 2015. Speeding forward to 2014 the band digitally release 2 brand new, finely honed Speed Metal tracks to shop around to labels, immediately getting the attention of Witches Brew! ACERO LETAL have stormed the underground, even garnering a Band Of The Week from Fenriz! Currently the band is promoting the newly released 7″ as well as laying down the groundwork for their debut full length album to be released later in 2015 on Witches Brew.