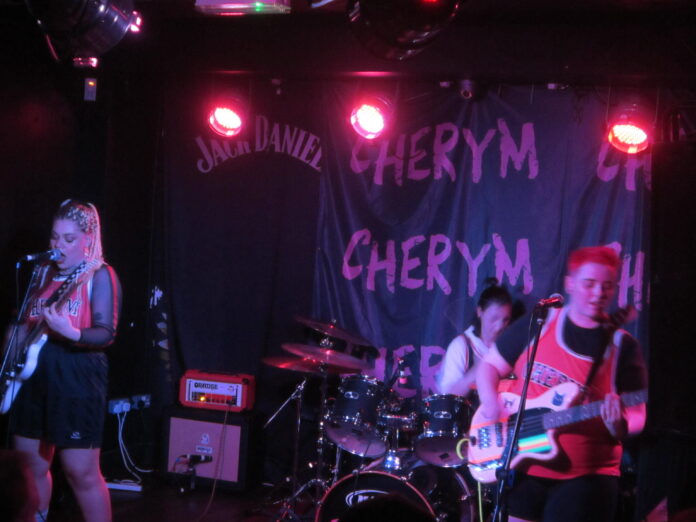 We seem to have an unending conveyor belt of post-punk bands out of Ireland`s capital city Dublin these days so it was a refreshing change tonight to enjoy a taste of what Northern Ireland has to offer. First up were a five piece band Brand New Friend from the seaside village of Castlerock whose sound has been referred to as “Bubblegum power-pop”. The band include siblings Taylor, Lauren and Logan Johnson along with Aaron Milligan and Luke Harris. They have opened for acts including Snow Patrol, Ash and Lewis Capaldi and released their debut album `Seatbelts For Aeroplanes` in 2018.

Their enthusiastic set this evening included songs old and new as they are about to record their next album. We enjoyed `Seatbelts For Aeroplanes`, `Stars`, the quite hypnotic `Plastic Flowers`, `Talk About`, the dreamy `I Wish I Was An Astronaut` a snippet of The Cure`s `Just Like Heaven` and `Girl` along with others in this nonstop thirty five to forty minute wholehearted and enjoyable set. The Johnson clan even had their Dad in the audience tonight and if I were him, I’d be very proud.

Tonight`s headliners are Stroke City`s finest Cherym, a pop punk trio from Derry who comprise Hannah Richardson (guitar and lead vocals), Nyree Porter (bass and backing vocals) and Alannagh Doherty (drums and backing vocals). They have recently released a five track EP called `Hey Tori` which is the follow up to their 2018 debut EP `MouthBreatherz` and are over on their debut headline tour of the UK.

Again, we get a mix of old and new as the girls smash straight into the captivating `She`s A Lot Going On`, melodic `Abigail`, `Pretty Boys` and `Listening To My Head` where they encourage us all to sing along. The pace slows down a little with `Weird Ones` and `Gone Girl` a song about abusive relationships and drummer Alannagh encourages anyone who has suffered any form of abuse to seek help. Hannah and Nyree then try to teach us all to join in with “woahs” before heading into another couple of cuts off the latest EP with the quite anthemic `Kisses On My Cards` and the jagged `We`re Just Friends before closing out with the punky `Take It Back`.

Despite cries from this fervent crowd for an encore, music was piped through the pa and the faithful are left wanting more.

Forget Erin, Orla, Clare and Michelle from the seventies based tv sitcom, this trio of Alannagh, Hannah and Nyree are the real Derry Girls.

For once tonight with Brand New Friend and Cherym, Ulster definitely said YES.