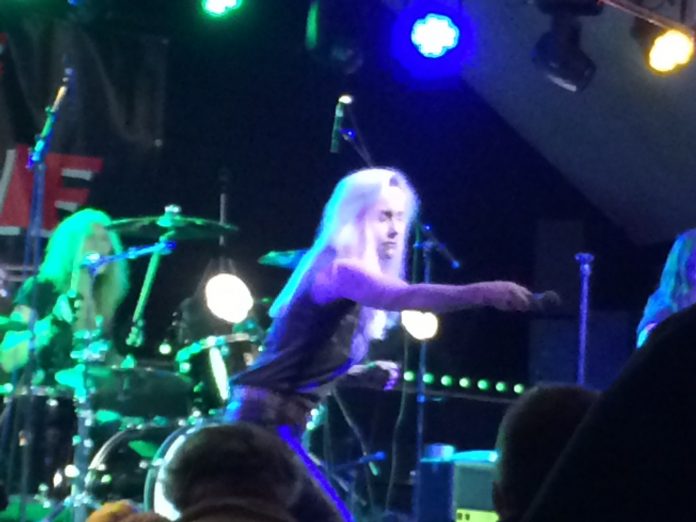 Ooohhh she’s a little runaway. Or something.

Rock n roll’s greatest Dandies, Last Great Dreamers, are celebrating 21 years this week since they released their seminal “Retrosexual” record. As they’ve proved since their comeback, they are still just as good as ever. Brilliantly they haven’t bothered to update their image – and frontman Mark and guitarist Slyder still look the part in their waistcoats Paisley shirts, scarves and hats. “No.1 Wonderboy” – which finally saw the light of day last year – is a bouncy, classic glam nugget and “Supernature Natural” stomps and stamps about like an angry child who just happens to have the best harmonies since Silver Sun. If the single they returned with,  “Ashtray Eyes”, shows why they were so welcome back then the “Retrosexual” stuff gives you an idea as to why they were quite so highly rated in the first place. “Far From Home”, with its fine melodies and killer chorus, is the best song Mott The Hoople didn’t write (except “All The Young Dudes, obviously…..) and “Last Great Dreamer” which comes on like Dogs D’amour when they were in the Dynamite Jet Saloon all those years ago is a stonewall belter. Not that this is an exercise in retro naval gazing. LGD released a single recently and both its tracks – “White Light, Black Heart” and “Dope School” are played here and bode well for the album to be released next year. The latter is played last, perhaps pointedly, as if to prove that Last Great Dreamers are looking to the future and here to stay.

Cherie Currie fixes a bloke in the front row with a stare: “These days, I get my thrills with a chainsaw, how about you, buddy boy?” There’s really no answer to that, is there?

An explanation might be required. You see, where once Currie was a member of the original all-girl rock band, The Runaways, she’s now – amongst other things – a “chainsaw artist”.

She’s also, as has been proved rather amply before the question she asked, an extremely captivating live performer. She has the crowd at The Robin eating out of her hand from the off. It helps that she remains striking of course, but Christ, she’s good too. Surveying the crowd, just before closing song, the still-rabble rousing “Cherry Bomb”, the soon to be 56 year old says: “Damn, there’s some good looking dudes in here tonight, I’m old enough to be your mother but I wore suspenders and corsets once….”

There is, though, one not inconsiderable problem. Yesterday she lost her voice. Originally the plan is that she’s only going to play one song tonight, but drugs (“only steroids, I have a…..history”) have patched up a bit and she’s able to play about 45 minutes. Kinda.

Getting audience members who know the words to Runaways songs like “California Paradise” up on stage with her probably isn’t how she wanted to spend her first UK tour for almost 40 years, but that’s what she does. A lady takes a turn on a medley of Bowie’s “Rebel Rebel” and Kiss’ “Do You Love Me?” (which also involves Mark from Last Great Dreamers) and it’s fun in fairness.

The songs she sings herself “It’s Alright”, and “Roxy Roller” in particular are impressive. The Bluesy “Midnight Music” benefits from her slight huskiness, and “Dear Mama” – a new song – is punky and snotty and shows Currie has lost none of her fire.

Voice protected sufficiently (there’s a live album to record at the next gig) Currie presses the flesh instead and whilst perhaps this is not the finest show this genuine trailblazer has ever played, no one collecting autographs at the show’s end seems to mind too much.