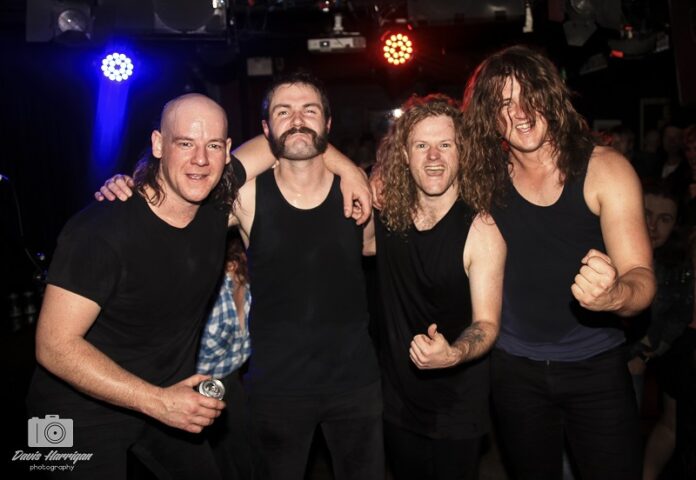 As they gear up to head back to the UK, rural Aussie pub rockers Black Aces are also set to celebrate the five-year anniversary of their highly praised sophomore album release, Anywhere But Here. In honour of the occasion, album opener Show You How to Rock N Roll has been given a brand-new lyric video release featuring behind the scenes and previously un-released footage of the band from over the years.

Produced by ARIA award winner and order of Australia Mark Opitz OM (AC/DC, Cold Chisel, Rose Tattoo, INXS) and engineered by Colin Wynne (Bad//Dreems, The Casanovas), Anywhere But Here was released in November of 2017 and received strong reviews and high praise from the likes of Twisted Sister’s Dee Snider no less. After seeing the band perform at Hard Rock Hell festival, Snider took to Twitter and declared Anywhere But Here his “new go to album” and said “Black Aces is like getting a new vintage AC/DC“.

A heart-sleeved throwback to the sweaty pub rock heyday of 1980’s Australia, Anywhere But Here‘s opening track Show You How To Rock N Roll is no exception, and is a rollicking, foot stomping tribute to living and loving the rock n roll of that era.

Somewhat poignantly, the boys from Bendigo have broken their colonial shackles once more to return to the UK this November, almost five years to the day since the release of Anywhere But Here. They’ll be bringing with them that same grit, authenticity, and determination that won over the hearts and bleeding ears of UK rock fans on their last venture across the pond.

With a new line up in tow, a return appearance at Hard Rock Hell festival, and a handful of club dates, Black Aces are along for a bloody good time, not a long time. Don’t miss your chance to catch Bendigo’s finest as they return to the UK for the first time since 2018!

The bands publicist, doctor and spirit guide Smokey Trucks had this to say of the band;

“The lads are absolutely chomping at the bit to return to merry old England, have some ripping yarns, see some old places and some new faces, don’t forget the dogs at the races, and they’ll be seeing you very soon come this November. So everybody tuck your pants into your socks and get ready for, Black Aces“

Watch the Show You How to Rock N Roll video right now: https://youtu.be/PaWsRphO1v4

Black Aces return to the UK November 2022, for a full list of tour dates, please see below.