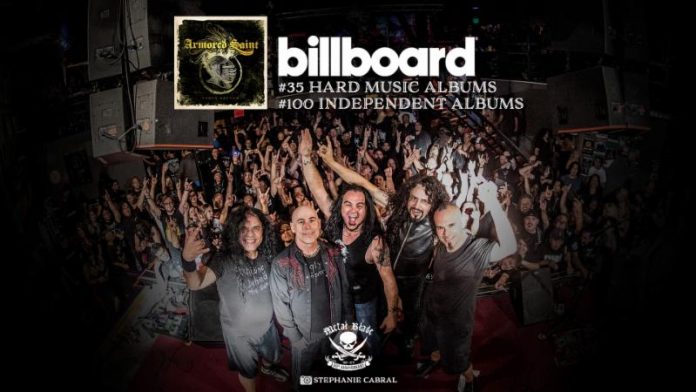 Armored Saint recently released their new live album, Carpe Noctum, via Metal Blade Records; for their efforts, the band has now entered the Billboard charts! See below for all positions:

Having toured with Metallica, Whitesnake, Alice Cooper, The Scorpions, and many other artists since their inception in the early 80s, Armored Saint has always been a highly regarded live act – not only in their hometown of Los Angeles, but also around the world. The only official release to capture this, however, is 1989’s live album, Saints Will Conquer – until now, with Carpe Noctum, which was recorded at the band’s 2015 Wacken festival set, as well as their headlining show in Aschaffenburg, Germany. To preview and purchase Carpe Noctum, please visit:metalblade.com/armoredsaint

Later this month, Armored Saint will return to Ireland and the UK (appearing in some cities for the first time!), before playing select USA dates in May. Joey Vera (bass) comments: “We’re really looking forward to playing these select UK shows in March. We’ve never played in Dublin, Manchester, Birmingham or Wales, so we’re super excited to play in these places – as well as in Belfast, which we’d played only once before. We get a lot of requests from our UK fan base and since we were offered the headline spot at Hammerfest, we decided to hit some of these other UK cities. So, here we go!”