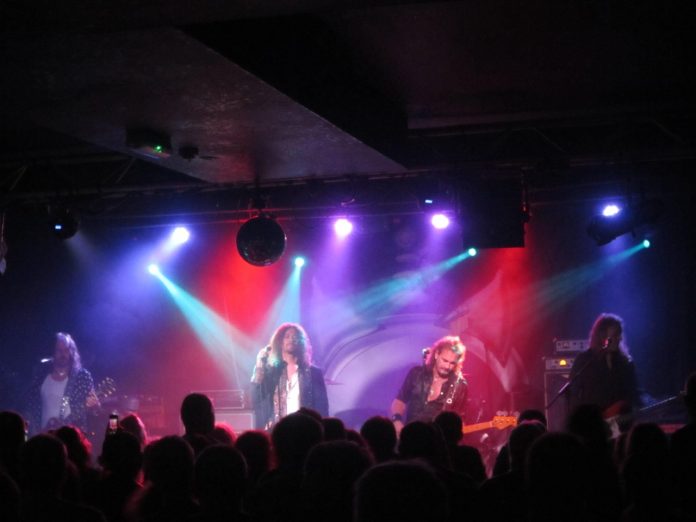 Damian gets his pomp rock on – and ends with a terrible pun…..

The band were formed in Horsham, West Sussex in 2015 and are categorised as a Classic 70s inspired rock group with a sprinkling of AOR Power pop.

A couple of cuts from the debut album are up next with “Last Man Standing” and the epic “Unfinished Symphony” with the heartfelt lyrics of `I don`t want the real world, it`s not the place for me, I still believe in my music, I got this unfinished symphony`

The beguiling “September Rain” follows before Paul talks about Dean`s recent heart attack, which they felt he could have had at the end of the tour rather than inconveniently at the beginning. Thankfully he looks well and aptly they play “Scars.” If ever there was a stadium anthem, “Scars” is that with the superb line of `What doesn`t kill you makes you stronger. `

The unerringly catchy “Timebomb” is played before the title track of the new release `Scarecrow, `

We get a cracking cover of the Black Country`s finest Slade with 1975`s “How Does it Feel” from `Slade in Flame` and I’m transported back to my teenage years along with this partisan crowd,

The set is closes out with “Broken Wing” with a superb Brian May type guitar riff ala Brighton Rock era. A brilliant way to sign off.

A short interval and the Mad Hatter himself Andy Stewart returns to the stage to tinkle the ivories before the fellas return and storm into “Greatest Story Never Told” and then finish with “Five Minute Celebrity”.

This was a storming show and the boys take their bows as Disney`s Aristocats song `Everybody wants to be a cat` filters through.

This gig was certainly the cat’s whiskers. Purrrr-fect!